The Seven Sacred Teachings: What we can learn from the species we protect 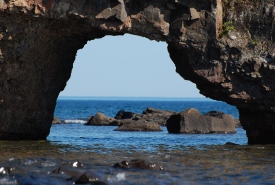 There are many land-based Indigenous Teachings that we all can benefit from learning. Above all, caring for the land and ensuring its survival and that it thrives is a teaching in itself. It something that we at the Nature Conservancy of Canada (NCC) do every day.

For many Indigenous Peoples, the Seven Sacred Teachings (also known as the Seven Grandfather Teachings) are the guiding principles on how to live our lives. Each Teaching can be represented through an animal, which may differ based on where and who the Teaching is from. The order they are taught may differ, too. The following Teachings have been taught to me by an Ojibwe Elder in terms of how we care for the land. I have permission to share these with NCC supporters in the hopes that they are inspired.

Indigenous Knowledge is our way of life, deeply rooted in culture. It is guided by natural laws and Indigenous protocols that differs across Indigenous Nations and cultures. It is important that we be respectful of not only the knowledge itself, but also the source of that knowledge. One framework of principles that can help ensure we are sharing respectfully is the OCAP (Ownership, Control, Access and Possession) Principles. It’s also important to share Indigenous Knowledge in a respectful way that attributes the original keepers, and is shared only with consent.

Wisdom is the Teaching we use to take all that we have learned and experienced on the land toward making decisions that will help protect it for the next seven generations. Wisdom is represented through the beaver.

Beavers were once endangered throughout much of their range due to over-trapping for their thick fur. Thanks to conservation efforts, reintroduction and better habitat protection, they have made a remarkable comeback over the last century.

Love is the Teaching we learn and use unconditionally. It is mutual and reciprocal, like the relationship we have with the land and all that she sustains. Love is often represented through the eagle.

NCC is protecting habitat for golden eagles across Alberta, in areas such as Sandstone Ranch in the Milk River Ridge Natural Area, the Frayn property in Crowsnest Pass Natural Area, as well as the Waldron Conservation Project in the Southern Foothills Natural Area. In Manitoba, NCC has partnered with the Manitoba government to expand Pembina Valley Park and also protects Jiggens Bluff II, a part of the Oak Lake/Plum Lakes Important Bird Area.

At its very core, Respect is shown for the land by all that we do to ensure it is protected for the next seven generations and beyond. It is the foundation for the relationship humans have with the land and honouring all that the land is and does for us. Respect is often represented through buffalo or plains bison.

At Old Man on His Back Prairie and Heritage Conservation Area (OMB) in Saskatchewan, NCC is protecting habitat for a reintroduced plains bison herd. Native to the land here, bison were extirpated (locally extinct) due to overhunting, but since 2003 they have been thriving on the native prairie grasslands at OMB.

Bravery is a Teaching that is given and shown most when we need it. When we stand up for the land, we are demonstrating Bravery to do what is right by its protection. Bravery is often represented by the bear.

NCC protects habitat for grizzly and black bears Perhaps most notably is our work protecting grizzly habitat throughout BC. From the Darkwoods Conservation Area near Creston, BC, to lands on the central coast (Koeye Estuary and the Rivers Inlet Conservation Assembly), to the remote Klinaklini Valley, we work to ensure that large tracts of grizzly bear habitat remain intact.

Honesty is a Teaching that starts with oneself. It begins with understanding how we can be genuine behind our intentions and how we can practise honesty toward the land and admit where and identify how we can do better to protect it. Honesty can be represented through the raven.

The raven is a common sight across many NCC properties across Canada. Once gone from many parts of southern Canada, they have now started to return. Fun fact about ravens: they have a diverse repertoire of more than 100 vocalizations.

Humility is an important Teaching when faced with the reality of our actions and the impact humans have had on the land. Humility is practiced when we own up to our shortcomings and learn from our past mistakes. Humility often takes the form of a wolf. Wolves are social animals and generally live in packs of three to seven individuals. Two centuries ago, the wolf was the most widely distributed mammal, found over large areas of the northern hemisphere. Today, the wolf’s habitat has been reduced due in southern Canada, in part, to the loss of large wilderness areas. In Ontario, NCC is working to protect key habitat for the eastern wolf on the Kenauk property is eastern Quebec.

Truth is the compilation of all the Teachings we’ve been given; it is to know that in order to maintain a reciprocal relationship with the land, we must be truthful with ourselves and with others. In terms of conservation, we seek truth in terms of what we can see happening on the land and the species that live there.

We see truth in the power of land conservation through the story of spiny softshell turtle in Quebec. NCC is protecting habitat for this species along Rivière aux Brochets in Pike River, Montérégie. This turtle is now found only in Quebec’s Lake Champlain area and research has shown that hatchings use this protected habitat.