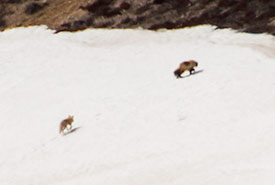 By Wendy Ho, as told by Claire Elliott

Before my time with the Nature Conservancy of Canada, I was a student at Carleton University doing my master’s research at a field camp in the Northwest Territories. Red fox sightings are common there; researchers see them all the time as there are dens nearby. The foxes have always kept their distance, coming and going. 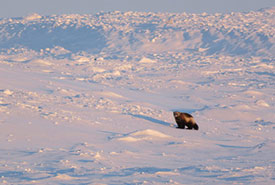 One sunny day in late June (a spring-like day for that area), I was sampling my vegetation plots when the local male red fox came jogging across the tundra toward me. It walked right by as if I wasn’t there, which was odd and intriguing. A few minutes later, a fellow researcher radioed in to report a wolverine had just run by him in a different part of our research area in the valley.

I grabbed my camera from my field bag and raced across the valley. I met my camp mate just in time to see a blonde wolverine start to climb the surrounding esker (a glacial hill). Still awestruck, we realized it was being pursued by the red fox that I had seen earlier. Here’s the interesting part: wolverines have been known to prey upon smaller predators, such as red foxes. In this case, our best guess is that the red fox had detected the wolverine roaming through his territory and decided to chase it out and away from his den and family. 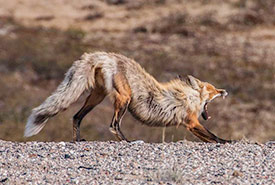 Now this wasn’t your high speed, adrenaline-pumped kind of pursuit; the whole scene was in slow motion. The fox trailed behind, and the wolverine occasionally looked over its shoulder to check on its pursuer. To the average person it may have even looked playful, with the wolverine slowing down, looking back and taking off again. The pair eventually disappeared over the top of the esker, and about 15 minutes later, the red fox came back and returned to its den. 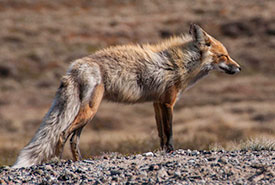 Turns out, the prey successfully drove the intruder away, keeping its babies from being eaten and living another day!

That was my only wolverine sighting in my two years working at the field camp. To my knowledge, wolverines are not seen there every year. We’ve seen other animals like Arctic wolves, foxes, caribou and grizzly bears. So, I was very lucky to have met a wolverine up close, and now I have a fun story to tell.

And in the spirit of this cheeky encounter, here’s an adaptation of the children’s song “The Bear Went Over the Mountain.”

The wolverine is one of 17 species featured in the Nature Conservancy of Canada's gift giving campaign: Gifts of Canadian Nature. To learn more and to give the gift of conservation this holiday season, click here. 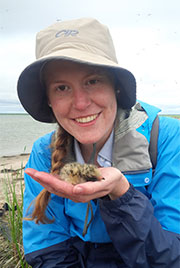