Tomorrow marks Groundhog Day, a North American tradition dating back to 1888. The groundhog, also called the woodchuck, is the largest member of the squirrel family and one of four marmot species that live in Canada. Rather than just focusing on groundhogs this year, here are some fascinating facts about these rodents and some of their close relatives:

The groundhog is the most widespread marmot and can be found from Nova Scotia to Yukon. Despite their name, groundhogs don’t just restrict themselves to the ground; they can also climb trees and swim. Nicknamed whistle-pigs, groundhogs make peculiar noises, including a loud whistle when alarmed, a squeal when fighting or hurt, tooth grinding when cornered and barking.

The hoary marmot got its name from the colour of its fur (hoary means greyish-white). For hours on end, these rodents “wrestle” each other, standing on their hind legs, putting their front paws together and pushing one another. They live along the treeline in the mountains of western Canada.

Yellow-bellied marmots, also known as rock chucks, can be found at high elevations in the mountains of southern BC. Parents act aggressively toward their young in order to drive them out of the colony once they’ve reached sexual maturity. 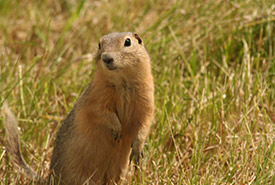 The Richardson’s ground squirrel occurs in grasslands in Manitoba, Saskatchewan and Alberta. Females are fertile for just two to three hours on one afternoon of one day each year. During this short period, each female mates with multiple males.

The Arctic ground squirrel is the only ground squirrel species found in the Arctic. It has large eyes surrounded by light-coloured rings, providing it with a wide field of vision, which makes it easier to detect threats. Its bushy tail is used for balance when running and jumping and as a blanket when sleeping. Twice a year, this species moults: in spring, it has a soft, reddish-brown coat and closer to winter, it has thick, grey-brown fur. 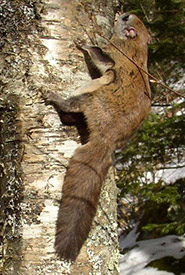 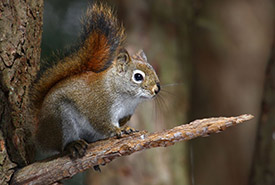 American red squirrels can be found in every province and territory. They gather between 2,000 and 4,000 pine cones and store them in middens (piles), which may be used by multiple generations. Believe it or not, these small squirrels sometimes eat young birds, mice and rabbits. Some have even been observed biting into maple trees to get at the sap inside.

Black-tailed prairie dogs are highly social, living in large colonies called towns, which have hundreds to millions of individuals. Every colony shares a complex burrow network, often covering around 250 acres (100 hectares) or more. Sadly, this cute rodent has been assessed as threatened in Canada. 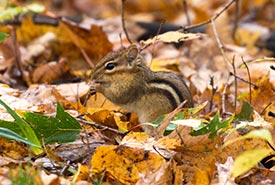 Like many other squirrel family members, eastern chipmunks make various alarm and defensive calls, such as low chucks and repeated high-pitched chirps, trills and chatters. Some research suggests that this species may use different calls for different predators.

Some of the species mentioned above have been sighted on Nature Conservancy of Canada (NCC) properties across the country. For example, Happy Valley Forest in Ontario and Johnson’s Mills Shorebird Reserve in New Brunswick provide habitat for groundhogs and American red squirrels. Also, a small yellow-bellied marmot colony inhabits the Rattlesnake Bluffs conservation area in BC. Richardson’s ground squirrels have been sighted on several NCC properties in Saskatchewan, namely the Edenwold Complex, Mortlach, Upper Whitesand 2, Buffalo Valley and Wideview Complex. Black-tailed prairie dogs have also been sighted on the Wideview Complex.