Are you gonna go their way? 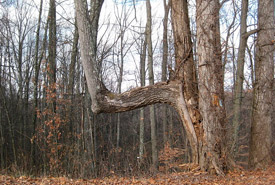 A walk through a forest can lead to wonderful adventures and new discoveries, both big and small. In most forests, it’s easy to get lost in the tree’s grandeur — figuratively and quite literally.

While some of us may use a compass to find our way, another tool was used by First Nations long ago: the trees themselves.

Documented findings of trails by European explorers date back to the early 1600s but it is believed they, and their tree markers, exsisted long beforehand. These paths helped travellers navigate through communities and forests and were often documented on hand-drawn maps. While today we use navigational systems such as GPS or street signs, Indigenous Peoples used bent trees (known as trail trees) to point toward a particular direction or as a warning sign. The first known map with the depiction of trail trees is Map of Ouilmette Reservation with its Indian Reminders, 1828–1844. 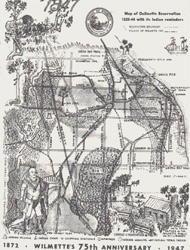 Map of Ouilmette Reservation with its Indian Reminders, 1828–1844, shows the first know documentation of trees as trail markers.

Trail trees were typically made by a member from a local Aboriginal community. This is done by carefully bending a sapling, usually a hardwood species (oak, maple), to the ground and toward a particular direction, tying it with a leather strap or vine. Although the young tree is bent downwards, its trunk will continue to grow upwards, creating an L-shape. Saplings on higher elevations were usually designated as tree markers due to higher visibility, making them easier to find in the forest.

These trees were important in the way tribes communicated with neighbouring clans and within their own communities. 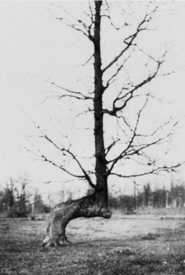 Trail trees were used to point Indigenous Peoples in the direction of resources, such as flowing water, and places where plants used for medicinal practices grew. They might also point toward their ancestors' burial sites.

Trail trees were also used to help guide travellers through different, and sometimes dangerous, terrain. Even today, contorted trees may appear where a trail steepens or slopes drastically, or indicate a safe spot to travel across a river or stream.

To this day, tree markers can be seen in forests all across North America.

The Happy Valley Forest, in Ontario, a Nature Conservancy of Canada (NCC) protected area, is home to tree markers once used to lead travellers through dense forest to their destination. Since 2012, NCC has been working to protect these trees and the deciduous forests they grow in.

Next time you’re out in a forest, ditch your compass and let the trees be your guide. Who knows what new adventures they may lead you to.