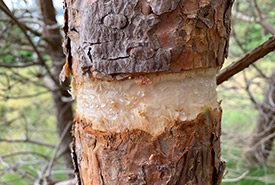 I am a conservation intern at the Nature Conservancy Canada (NCC) in Newfoundland and Labrador, and in this role I often have family and friends asking me what NCC is, what their role is in the conservation community, and most commonly, what my role is at NCC. Often, I will describe what a day of field work is like, which usually consists of general property monitoring to collect data on NCC’s projects. I then go on to explain the importance of the data we are collecting and how this information is used in the future. However, on occasion, I have something unique to explain and talk about.

Early on into my internship, myself and the other members of the Newfoundland and Labrador stewardship team (located in St. John’s) headed over to the west coast of the province to carry out our annual property monitoring. Part of this work includes tree girdling and monitoring existing girdled trees.

What is tree girdling?

When I told my family about this, the first thing I was asked started at the basics: “what is tree girdling?” Girdling is the process of removing a small section of tree bark, which results in the disruption of the cork cambium, phloem and xylem of the tree. This is done by carving a thin (2.5 to 5 centimetres in width) ring around the circumference of the tree trunk using a tree girdling tool. This blocks the flow of nutrients and water, slowly resulting in the tree’s death. This process is comparable to tree felling; however, it is less labour intensive, occurs over a longer period and mimics the natural process of a tree’s life cycle, resulting in less debris piled up along the forest floor at once. To further mimic the natural cycle and reduce the volume of debris on the forest floor, NCC ensures that only a subset of the target population is girdled at once. Staff then return to these locations and assess if more trees can or should be girdled.

Now that we know what girdling is, why do we need it? Well, that can depend on the situation. The best way I can explain it is by using two real-life examples from the field.

Two of NCC’s properties on the west coast of Newfoundland have pine tree species, each girdled for a variety of reasons.

Jack pine trees were planted in a cultivated forest stand within NCC’s Barachois Brook Nature Reserve. These trees are not native to the island of Newfoundland and resulted in a stand of unhealthy forest. Approximately 50 per cent of these pines were girdled to reduce competition for native species in this area and create snags (standing dead trees) and felled trees, which are important habitat for many boreal forest species. Slowly removing these trees allows natural regeneration to occur and hopefully restores the natural biodiversity and allows the forest to return to a healthier state. 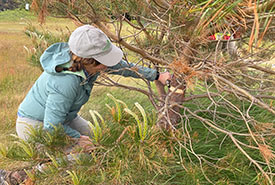 Scotch pine trees are a non-native, and sometimes invasive, tree species that originated in Europe. These trees can spread quickly in open areas, forming large patches that crowd out native species. Their needles coat the ground around the trees and change the pH of the soil. This alters the natural landscape and changes ecosystem function. Scotch pine can be found on NCC’s Sandy Point Nature Reserve, a unique area that contains salt marshes, sandy beaches and dunes, and boreal forest. By girdling these ornamental trees on Sandy Point, NCC aims to thin out the population and reduce the speed of spreading.

A huge part of conservation is monitoring invasive and introduced species because they can quickly change the natural biodiversity and landscape of an area. And that’s why it is so important to be aware of what species you are planting, where you are planting, and how they might influence the surrounding environment.

To be this close and connected to nature is a valuable opportunity. NCC offers young professionals like me a chance to enhance their expertise in conservation biology while making wonderful summer memories. Thanks to the supporters of the Keep The Rock Rugged campaign, more and more interns are able to join the program every year and help care for nature across Newfoundland and Labrador. 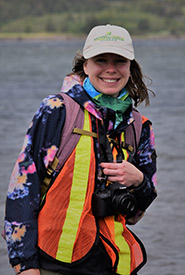 Triina Voitk is a Nature Conservancy of Canada conservation intern based in Newfoundland and Labrador.