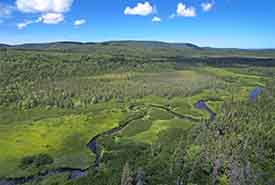 Fifty years ago, nations gathered to create the world’s first global agreement to conserve a habitat.

Maybe it will surprise you that this agreement wasn’t for tropical rainforests or coral reefs or oceans. It was a for a habitat that had long been undervalued, and as a result was rapidly disappearing. Fifty years ago, there was a global call to action to save our wetlands.

On February 2, 1971, the Convention on Wetlands of International Importance was adopted in Ramsar, Iran. Often referred to as the Ramsar Convention, its purpose was to stop the worldwide loss of wetlands. Today, 171 countries, including Canada, are parties to the convention. 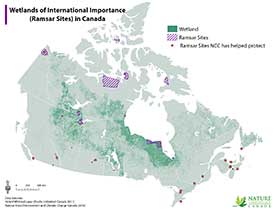 Wetland Ramsar sites in Canada. (Click to enlarge the map)

The Ramsar Convention has helped many wetlands. Over 2,400 wetlands around the world have been designated as Ramsar Wetlands of International Importance. Canada has 37 Ramsar wetlands, including the Columbia Wetlands (BC), Quill Lakes (SK), Lac Saint Pierre (QC) and Grand Codroy Estuary (NL). World Wetlands Day marks the signing of the Ramsar Convention and is a day to celebrate the importance of wetlands and their conservation.

Despite a global agreement and a special day of recognition, we have not been kind to wetlands over the last half century. Since the Ramsar Convention was adopted, over one-third of the world’s remaining wetlands have been lost. They continue to disappear at a rate faster than forests, and the loss is accelerating. 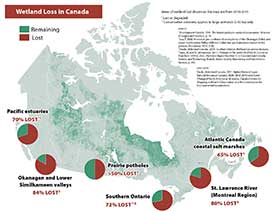 Wetland loss in Canada. (Click to enlarge the map)

Our choices will matter for both nature and people.

Wetlands come in many forms across Canada. Our vast northern peatlands are some of the most extensive and intact wetlands left on Earth. But in southern Canada, we’ve done our part to contribute to global wetland losses by draining forested swamps, prairie sloughs and coastal salt marshes. In many parts of southern Canada, only a fraction of our original wetlands now remain.

What all our different wetlands share is their ecological importance. Coastal fens along the Great Lakes coast and saline wetlands of the Prairies, along with over 90* other wetland communities, are of global conservation concern. Wetlands provide spawning habitat for many sportfish. They produce millions of waterfowl each year and are essential for keeping Canada’s “duck factory” open. Almost one-third* of Canada's terrestrial and freshwater species at risk regularly occur, or rely, on wetlands, including eastern mountain avens, yellow rail and Blanding’s turtle.

Canadians need wetlands now, more than ever. Our northern peatlands are global giants when it comes to storing carbon. Wetlands around our cities and farms are one of the best nature-based solutions to buffer communities from the extreme weather events of our rapidly changing climate. They are the Swiss Army Knife of ecosystems. The wetlands around us store carbon, hold flood water, recharge creeks during drought, stop storm surges and provide fire breaks. We can’t afford to lose them. The best use of wetlands is to have them remain as wetlands.

Celebrating World Wetland Day every February 2nd may not seem ideal for Canada’s wetlands. Many are frozen and quiet, blanketed with snow that covers trees and turtles. But they are waiting for spring, when their most important work will begin. As ice cracks and snow melts, they will fill with the spring runoff. Like giant sponges on the land, they will turn unwanted floodwaters into much-needed summer flows to our rivers and streams.

There are few ecosystems on the planet that burst with as much biodiversity as a Canadian wetland. When awakened from their winter slumber, the combination of water and long Canadian spring and summer days generates an explosion of photosynthesis that fuels an extraordinary abundance of life. During spring and summer, some of our wetlands grow more than a tropical rainforest does in an entire year. It’s because of this season of abundance that marsh wrens from Mexico and barn swallows from Bolivia choose to make their annual journey north.

The next 10 years will be our decision decade for nature. Here in Canada, we have an incredible opportunity to lead the way in conservation that will benefit the next generation of Canadians and the world. Canada is one of over 30 nations that have now committed to protecting 30 per cent of our lands and waters by 2030. This means more than doubling our current system of parks and protected areas. Protecting the vast peatlands in our north is an opportunity to reach that target. In doing so, we will save some of the planet’s last wetland wilderness areas. In southern Canada we need to move quickly to protect the wetlands that are critical for nature, and the wetlands that will protect us from a rapidly changing climate

The solutions are waiting for us. Key Biodiversity Areas offer an opportunity to recognize critical areas for wetland wildlife and intact wetland ecosystems — many of which could qualify as additional Ramsar sites. Incentives to landowners, ranging from Ontario’s Conservation Tax Incentive Program to ALUS, are tools to reward private landowners for looking after the benefits that wetlands provide to their communities. We need forward-thinking wetland policies and plans that consider how this critical element of our infrastructure can be strengthened. We can build on the success of restoring wetlands in places like Pelee Island in Ontario and the Campbell River Estuary in BC to showcase the benefits to nature and people. Donations to support wetland conservation can be matched through the Natural Heritage Conservation Program and the North American Wetlands Conservation Act.

We can choose to be the new generation that values, conserves and creates wetlands, or the generation that continues to live with loss and passes on an ecological deficit to our children.

Fifty years ago, there was a commitment made to future generations to stop the loss of wetlands. We need to fulfill that promise. Our wetlands can’t wait.

Donations to support wetland conservation to NCC or Ducks Unlimited Canada can be matched through the Natural Heritage Conservation Program and the North American Wetlands Conservation Act.

* If you're interested in the dataset used to derive the respective numbers, please contact me at dan.kraus@natureconservancy.ca