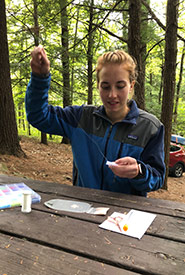 Beading outdoors is where I'm most at peace. Here, I'm beading while camping at Bon Echo Provincial Park, Ontario. (Photo by Chase Wastesicoot)

Beading is more than a hobby to me, it’s how I connect to my culture and to the land.

My traditional name is Mein-gun kwe, and I identify as Mohawk and European. My family is wolf clan from Tyendinaga territory, but I was born and raised on the ancestral lands and treaty lands of the Mississaugas of Scugog Island First Nation and the traditional territory of the Mississauga Nation, known now as Oshawa, Ontario.

Beading is a cultural practice among some Indigenous Peoples and, although we learn from and share with each other, each beader has their own teachings, designs and story. My story may have similar teachings to other beaders, but it’s not the story of who all practice this art.

Culturally, our histories and teachings were passed down orally. There are some written sources about the history of beading, but I learn about its cultural significance from my aunties, cousins and Indigenous friends.

Some facts about Indigenous beading include: 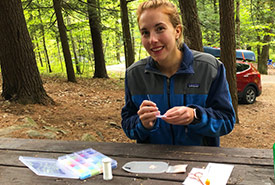 Inspiration from my work comes from Mother Earth; from the sea, to the forest, to wildlife. (Photo by Chase Wastesicoot)

Ways of beading, patterns and stories are unique to Nations and communities all across Turtle Island. For example, when flat stitching to create a design, I was taught to put down four beads at a time. Four is significant in Haudenosaunee culture, as it signifies the four directions and the four dances.

There are many different methods of beading, many of which I still have yet to learn, but some include: 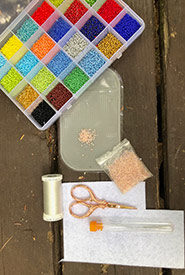 For many Indigenous Peoples, beading is done ceremoniously and “with a good mind and heart.” I was taught that one should never bead if they’re in a bad mood or if they have bad energy, as that energy is woven into one’s work. Personally, beading to me is medicine. It’s one of the ways I connect to my culture. As someone who didn’t grow up with the traditions and practices of Mohawk life readily available, learning how to bead has become and continues to be a very important part of my identity journey. 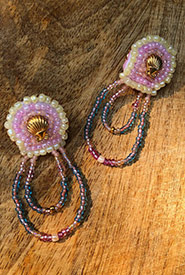 In addition to spending time outdoors, I bead to connect to my Haudenosaunee roots. My favourite place to bead is anywhere outside, where I’m surrounded by Mother Earth and all her beings. I find pattern and design inspiration in the colours of animal fur and feathers, the sun as it shines through the leaves of a bur oak tree and the reflection of long grasses on the water’s surface. 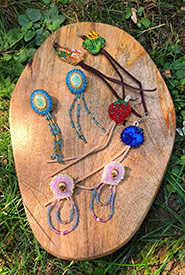 After hours of practice, teachings, mistakes and successes, I released my first-ever beading collection to share with others! (Photo by Raechel Bonomo/NCC staff)

I always get questions about whether or not it’s OK for non-Indigenous Peoples to wear traditionally-made creations like earrings, necklaces, pins, etc. Depending on which Indigenous person you ask, you might get a different answer. To me, I encourage non-Indigenous Peoples to support Indigenous artists by buying and wearing their beadwork. As long as it isn’t cultural wear, such as a ribbon skirt, or a traditional design unique to a Nation or a community, I believe it is OK. It’s important that you do your research to ensure you are supporting an Indigenous artist – not purchasing an “Indigenous-inspired” piece.

The presence of Indigenous beadwork and beaders in today’s society is a testament of our culture’s resiliency in the face of colonialism. For many years, the Indian Act made it illegal for Indigenous Peoples to practice our traditions, including beadwork. The fact that this practice is alive and thriving today, and being taught to future generations of Indigenous Peoples in Canada, demonstrates the strength of Indigenous communities and our Peoples.