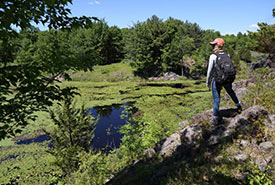 Is this what you think of when you hear conservation biology? ( Photo by Mike Dembeck)

There is a seasonal nuance to being a conservation biologist. If you look at my job description optimistically, my job involves afternoons looking for spring ephemeral flowers, summers canoeing on lakes and early autumn mornings catching the last glimpses of migrating birds. If you’re feeling pessimistic, my job involves dodging swarms of blackflies, long afternoons melting on rock barrens, ticks and falling in a wetland for a third time that day (all true stories). No matter how you look at it, typically the job is split into two seasons: the on-season (summer) and the off-season (winter). 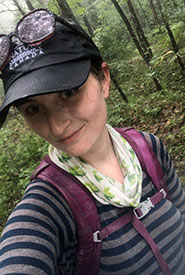 Or do you think of tough, rainy days outside? (Photo by NCC)

I resent the term off-season. When I was a student, it meant the anxiety of seasonal work. Most environmental jobs start out as contract work, so I was constantly wondering if I would still have a job in winter. Now in my career, the term implies my workload is somehow less demanding, but I’ve never found that to be the case. I prefer to call it the “other season,” because although my workload doesn’t change, the things I focus on do.

So, what do conservation biologists do in the “other season?”

As I’m writing this, I keep getting distracted by the snow drifting patterns across the abandoned fields outside my window, and I catch myself thinking how wonderful it would be if those fields were once again a forest. The other season is where I have time to dream. It’s the time where I finally have room in my head for those big projects I’ve wanted to focus on all year. Maybe I’ll restore a wetland, or focus on increasing population numbers of an endangered plant or rehabilitate a trail to give people sustainable access to a Nature Conservancy of Canada (NCC) property. Every task I do on an NCC property starts with a lot of science and a little bit of dreaming. 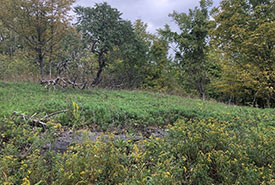 This rock barren in the Frontenac Arch is dominated by invasive cypress spurge. One of my "other season" dreams this year is figuring out how to restore it. (Photo by NCC)

That forest isn’t going to build itself (well, not on the timeframe that I want), so I must make practical plans. Conservation work takes money. That means seeking out grants, writing applications, drafting budgets and workplans, and trying to turn those dreams into trees. I’m thankful to my fantastic colleagues at NCC who specialize in helping make these dreams real (and reining me in when my ideas get a bit farfetched).

3. Reflect on the year's data

When I’m in the thick of field work, it’s hard to see the big picture. One of my tasks in the other season is compiling all the data my team and I collected over the year. We need this record of what we did so we can track if the field work was successful. No matter how hard I try to keep on top of this tedious job during the field season, there are always photos to file, data to analyse and final reports to write in the winter months. These are the least fun to do, but are perfect for days with miserable weather, as that makes me feel a little better about being indoors.

If you try to send me an email from April to November, there’s a 70 per cent chance that you’ll receive this response: “Please note, I am in the field with limited access to my phone and email until [date]. I look forward to responding to your message when I return.” I do try to keep my inbox manageable, but the only time I ever get the number of unread messages down to single digits is in the other season. 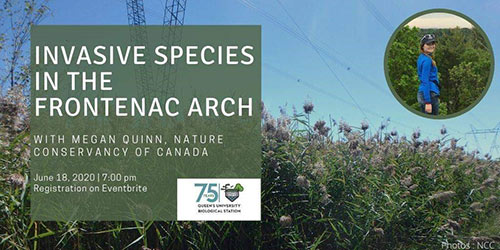 This year, the lines between field-season and the other-season were blurred because of COVID-19. This meant more time for virtual teaching.

The only thing I love more than telling people about my job is doing it, and the other season is a great time for educating. For the past few years, I’ve given various guest lectures at Queen’s University, taught webinars on invasive species management and done my best to spread the word about the great work NCC does. I suppose even the act of writing this blog falls into that category, and I tend to get a lot more writing done in the other season.

There are conservation biologists who have forgotten more than I will ever learn, but that doesn’t mean I won’t stop trying to learn more. There are always new species to learn, new techniques to research and new data to sort through to make the best choices we can. Typically, I like to expand my learning by taking it abroad. I’ve had the privilege of working with colleagues in the Netherlands and England to broaden my ecological knowledge and share information on an even bigger scale. This hasn’t been the ideal year for it, but I’ve kept up by attending global webinars, online workshops and continuing my quest for learning. 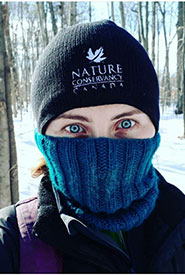 I like winter field work! For one thing, there are less biting insects, and if you dress for it, the days can be quite pleasant. People are often surprised to hear there is a lot of field work I can still do after the snakes go into hibernation and the birds fly south. In winter, we can still control invasive shrubs, remove historical dump sites and fix features, such as fences and signs. There are some things that are surprisingly easier to do in the other season. Mammals that usually stay hidden are revealed by their footprints in the snow. Some tree species are easier to identify once they’ve lost their leaves, since you can look at the branch structure. Most importantly, field work in the other season makes the warm cup of tea I enjoy when I get home even more satisfying.

When people ask me if I’m glad that field season is over, I usually just smile at them. I don’t know a single conservation biologist who got into this field to stare at a computer screen for five months in the other season. They’d much rather be standing in the field. However, those months of inside work are what keeps the conservation machine moving. Field season or other season, there is always work to be done as a conservation biologist, and I wouldn’t have it any other way! 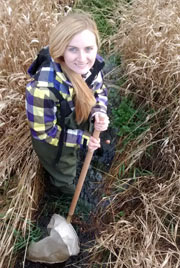