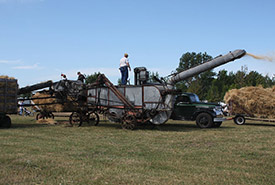 Threshing machine, a modern version of one that was used on the family farm back in the day (Photo by Ben Franske)

It wasn’t until I became a grandparent that I started pondering the question, “What is my legacy?” Separating the wheat from the chaff took a great deal of time and thought. It was while reviewing my past experiences that led me to find the answer I was seeking.

My legacy began with my grandfather, a veteran of the First World War and a parent of several children through the Great Depression. His most precious gift to the family was that of sharing the wisdom he earned from the School of Hard Knocks. He consistently demonstrated to us his respect, patience and compassion for all life forms, but just as important was his life lesson in resiliency. In turn, we grandchildren learned.

One year at harvest time, the task was far too big for Grandfather to handle alone, so his family, who lived in communities across central Alberta, arrived to help with harvesting the oats. With the women taking responsibility for the babies and toddlers and preparing three meals and three “coffee breaks” of food, water, cookies, sandwiches, cakes etc. per day, we grandchildren (aged four to eight) headed out with Grandfather and his team of horses and wagon to bring in the oat bundles while the men took care of the thrashing. Grandfather could often be heard calling out, “Come on now. There will be time to play when the work’s done.” It was then that we children learned to work first, that where there is a will there is a way. That many hands make for light work and diverse talents overcome challenges. Grandfather taught his descendants that we were not only responsible for our own and our family's well-being but also our community and the world we lived in.

Although I didn’t understand it as a child, I now acknowledge that the best legacy shared with us children was resiliency. You see, I’ve learned there are no guarantees in life, that life doesn’t always give us what we want and that the only mistake we make in life is failing to learn from life’s lessons. When faced with new and/or big life challenges, the best thing we can do is empower ourselves through education, understand our truth and then as Mahatma Ghandi put it, “Be the change you want to see.”

How to be the change you want to see

The Nature Conservancy of Canada (NCC) is one way that I can be the change I want to see. With each step I take in my volunteering and writing for NCC, I grow, adapt and evolve. With each hand up or out in support of our natural biodiversity, I have witnessed the ripple effects of positive change. Now, one might say that giving is a one-sided relationship. However, through my journey I have learned that in truth my gift was balanced out by receiving nature’s gift of health, hope and happiness. But what I am especially grateful for is rediscovering peace of mind and OMG, is there anything better than discovering that nature generates vitality, aka my fountain of youth?

In addition, NCC has supported my goal of sharing my ancestor’s legacy of resiliency with my granddaughter. At one-and-a-half years old, she was introduced to butterflies and now, as seen on TVO’s Striking Balance documentary, she, at five-and-a-half years old, has become a citizen scientist. When she was two-and-a-half, she started volunteering with NCC, discovering she could help by watering the thirsty seedlings that volunteers had recently planted. Each year, she learns not only more about the needs of our native species but just as importantly that, yes, she can make a difference.

Another thing that keeps me inspired are the seniors who return year after year to donate their resources and time. I am happy to say that in NCC’s and my 15-year relationship, our continued support for the Beaver Hills Biosphere is producing positive change, both for today and tomorrow. Although I acknowledge that there is still much to be done.

Lastly to those who do not share my perspective, I would like you to consider the following: a coin has two sides; a head and a tail. Neither side is right or wrong, good or bad, better or worse. They’re simply the outsides of the same coin. What balances off and binds the outsides together lies in the middle. 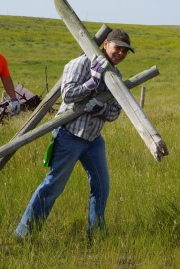