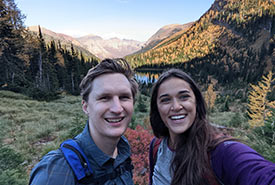 In the winter of 2017, I saw an advertisement for the Nature Conservancy of Canada’s (NCC’s) Conservation Internship Program. I was in the middle of law school and had planned to return to the summer job that I had worked at and loved for the previous eight summers.

Feeling like I needed a change, I was familiar enough with NCC’s interesting work through research on the web and media stories that I thought I would take a chance and apply. I was lucky enough to be hired by the wonderful staff at NCC’s Saskatchewan Region, and for the first time in nearly a decade I entered my first day of a summer job not knowing what to expect.

What happened next was one of the most memorable summers of my life.

As a communications intern for the region, it was my job to help document the many projects that NCC was implementing in Saskatchewan that summer. This took me to all corners of the province. I documented and participated in prescribed burns, tree and sedge plantings, fence pulls, animal and plant identifications, education sessions and flew in a three-seat bush plane, to name just a few. 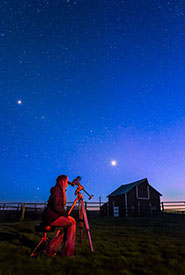 I will never forget camping under the stars that summer at Old Man on His Back Prairie and Heritage Conservation Area (OMB), one of NCC’s most unique nature areas. As a Dark Sky Nature Preserve, seeing the stars on a clear night at OMB is one of the most amazing experiences I have ever had.

On a beautiful August night, I decided to sleep outside my tent so I could watch the stars. Having fallen asleep under the type of starry nighttime sky that poetry is written about, I found myself awoken at around 3 a.m. With no one else awake, I watched as a red fox silently walked by the edge of our camp. The fox was only travelling through on its way across the prairie, and it hardly acknowledged my presence other than a single moment to look back at me. Looking me directly in the eye for a moment, it then turned and continued on its path toward the ridge we had seen bison the evening before. I didn’t think I could ever be more grateful for taking a job than I did in that moment. And yet, this is not the most memorable moment of my intern experience; that honour is held by my first day as an intern and the day I met my fellow interns. 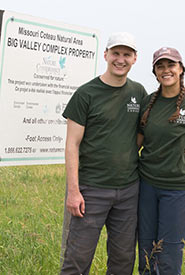 Unbeknownst to me, I was one of about six NCC interns hired that summer. Each of us was just as idealistic and excited as I was when we arrived for our first day. As a group of interns, we all got to know each other quickly, as we had a similar passion for the work we were all doing. One of the interns was named Breanna and, by happenstance, for the first couple of weeks of our internship we did not see much of each other. As I talked to some of the interns, she was often described as incredibly intelligent, hilarious and the life of the party. As summer continued, I was determined to get to know her better. As someone with more field experience than me, I had the opportunity to watch and sometimes assist as Breanna identified plants and birds at multiple NCC bioblitzes, saw her show off her muscles planting trees and even witnessed her co-pilot a plane as we completed aerial monitoring. She was a force of nature.

After the most memorable summer of my life, I was determined to stay in touch with her. Like the trees that Breanna and I planted that summer, our relationship continued to grow. Recently, on a hike just outside of an NCC property, I asked Breanna to marry me. She said yes.

When I look at Breanna, I am reminded every day how lucky I was to be an NCC intern. The amazing experiences I had, the amazing people I met and the love that grew into my life. 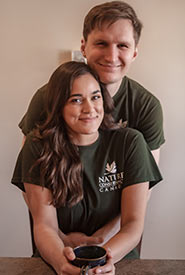 This past summer Breanna and I attended another NCC Conservation Volunteer event where we planted native prairie flowers at the NCC Big Sky property. Wearing our NCC shirts and armed with tiny planting shovels, we were reminded of where it all started for the two of us. We looked at each other and vowed to get out to more NCC volunteer events.

Posted in: Time for nature, Interns