Why I welcome a conservation plan for the Great Sand Hills 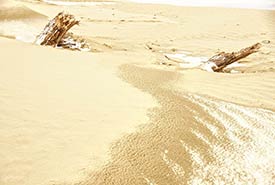 A tree sunken into the sand and snow at the Great Sand Hills, SK (Photo by Bill Armstrong)

Fifteen years ago, I signed up for a photography workshop at Saskatchewan’s Great Sand Hills, a place I’d heard about from other photographers but had never visited. I remember the first morning of the workshop, watching the rising sun transform the hills into rippling waves of gold and orange, being enchanted by the unique beauty of the place. I have been back several times since that first experience, including once after a mid-April snowstorm that showed the hills in a different light.

The hills are much more than a great place for photographers, of course. This area, covering 1,950 square kilometres, is the second largest example of active sand dunes in Canada. And while they are called the Great Sand Hills, I subsequently learned that the area is a mosaic of habitats that also includes native grasslands, vital wetlands and vegetation. 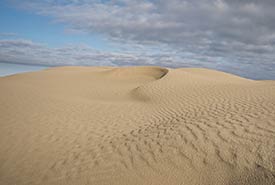 I also learned that the hills were formed as the last glaciers retreated about 14,000 years ago. There is archaeological evidence that Indigenous Peoples periodically occupied the hills about 11,000 years ago, and that they hunted bison in the area beginning about 9,000 years ago (Grambo, R). The settlers who came to the hills in the early 1900s discovered that the land and the climate were best suited to ranching, rather than farming. Grazing animals, of course, are an important part of the ecosystem, helping to support a diversity of species and the health of the native grasslands. Thus, the hills provide habitat for antelope and mule deer, as well as endangered species, such as Ord’s kangaroo rat and dusky dune moth, and many species at risk, including Gibson’s big sand tiger beetle.

In the late 1970s, oil and gas exploration began in the area. As the pace of development increased in the 1980s, local residents and visitors began raising their concerns about the disruptions to habitats caused by these activities. A series of planning committees and land use strategies produced few results; but they did prompt the provincial government to commission a regional environmental study. A scientific advisory committee then reviewed the study, and in 2004, the provincial government accepted the committee’s recommendations to establish a 366-square-kilometre ecological reserve and to protect 18 biodiversity areas identified in the study. 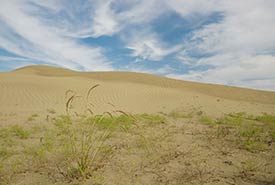 I regarded these moves as important steps in protecting this fragile and beautiful landscape, while wondering what more action might be taken. I welcomed the recent news, then, that Environment and Climate Change Canada provided funding through the Government of Canada’s Nature Fund to the Nature Conservancy of Canada (NCC) to develop a Natural Area Conservation Plan for the area. The program requires one-to-one funding from private donations; Cameron Wood, NCC’s director of conservation in Saskatchewan, tells me they have reached about 70 per cent of that goal.

As NCC connects with donors and works toward achieving their goal, I reached out to Cameron for more information on how the planning process will unfold. He told me the plan will build on the work already completed by the Province, while gathering as many diverse perspectives about land use, biodiversity and other factors as possible, through engagement sessions and one-on-one discussions with relevant people.

“A Natural Area Conservation Plan is intended to reflect the full suite of considerations and actions to conserve biodiversity in a given area, although it does tend to focus on the role of those creating the plan, in this case NCC,” Cameron explained. 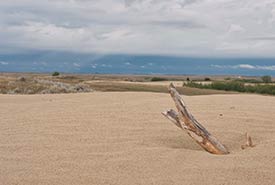 The vista at the Great Sand Hills, SK (Photo by Bill Armstrong)

I was also curious about questions of authority and jurisdiction, since the plan will be funded by federal dollars and private donations, but the Sand Hills are a provincial responsibility. How would the completed plan apply? Again, Cameron helped me out.

Because the planning will be led by NCC, the main focus will be on actions that can be completed by conservation organizations rather than focusing on future links to legislation or provincial policy. “NCC will continue to work in collaboration with the provincial and federal governments, conservation partners, industry, agricultural producers and Indigenous communities in ways that conserve this important area of the province.”

The completed plan is likely a few years away, but in the meantime, I take comfort in knowing that people who care about the future of the hills will have their say through this conservation plan. For myself, I plan to make a statement or two with some physically distanced photography in the hills later this summer.