Working in a winter wonderland 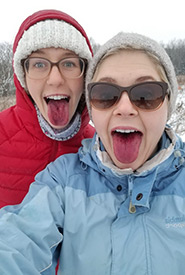 Kaitlin and I having a purple tongue contest with wild grapes (Photo by NCC).

When I first started at the Nature Conservancy of Canada (NCC), I remember talking to my supervisor about how much field work I would be doing, and being told that I would probably be in the office most of the time during the colder months because that’s when field work tends to die down. So, I mentally prepared myself for a few months of being in the office all day, every day. Don’t get me wrong; office work is an important aspect of conservation and gives me the chance to see what goes on in the background of NCC’s work. For me, though, nothing compares to being in the great outdoors! The last thing I expected was to be working in the field to control woody invasive shrubs well into December.

My first experience with winter field work was our week-long trip to Cockburn Island, a remote island west of Manitoulin Island. Currently, NCC protects more than 60 per cent (more than 10,000 hectares/24,710 acres) of the island. 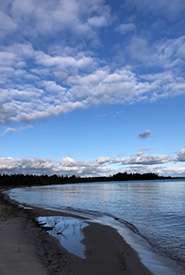 A beautiful beach on Cockburn Island (Photo by NCC).

After months of planning, the morning of the trip finally arrived with a 5:30 a.m. start and a long drive to Meldrum Bay, followed by a boat ride to the island. We arrived the same week as the first significant snowfall of the year, so we were working in about a foot of snow and below freezing temperatures.

I had only learned of this island’s existence when I started my NCC contract and, to be honest, I didn’t know what to expect. My coworkers raved about the island’s beautiful wetlands, alvars, beaches and forests, as well as how much they loved the people who have cottages there. (Fun fact: There are only two year-long residents on Cockburn Island, and there used to be only one!) When we arrived, it didn’t take me long to see that the island was gorgeous, especially when covered in a fresh layer of snow, and the people who have cottages there couldn’t have been friendlier.

Throughout the trip, we worked with a surficial geologist who was doing research on the soils, landforms and glacial history of the island, so we spent a lot of time travelling around trails and forests to examine soil samples, which was actually more interesting than I thought it would be. He brought us to some interesting formations around the island, like sand dunes, historic beach ridges from millennia ago, and glacier paths, used soils and topography to show us how the island was formed over thousands of years. My supervisors, Kaitlin and Esme, took time to teach me some bird and winter tree identification while we were in the field while some local hunters taught me a lot about deer populations. So, overall, it was a very interesting and educational trip. 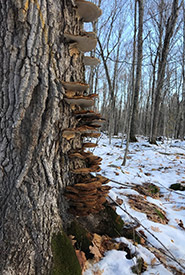 Fungi growing on a tree on Cockburn Island (Photo by NCC).

After we got back home from Cockburn Island, the winter weather stuck around. This gave me the opportunity to help control other kinds of shrubby invasive species, such as European buckthorn, autumn olive and multi-flora rose, of which there is no shortage in southern Ontario. So, Kaitlin and I headed down to our Wingham field station to start protecting some important habitat and preparing our Lower Maitland River Valley properties for restoration. I had never done any winter field work before this co-op term and since nearly all of the vegetation was dormant, I didn’t expect to learn much… but boy was I wrong! 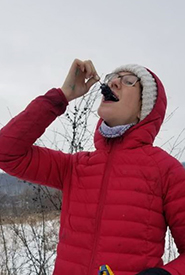 My favourite thing that I learned from this experience was how tasty autumn olive berries and wild grapes are when they’re covered in a light frost (Seriously. It’s game-changing). One of the most valuable things I learned was that if anything still has green leaves in December, it’s most likely not a native plant. This comes in very handy when you’re searching for European buckthorn shrubs in dense thickets of branches and vines.

Kaitlin showed me how to identify trees in the winter when there are no leaves — using buds, stem arrangements, leaf scars and bark. I also learned how to ID and control a few invasive plants I wasn’t aware of before, such as common privet. Overall, I ended up gaining some of the most valuable field experience in the winter and enjoyed it more than I expected.

Shayne Poleyko became part of the Nature Conservancy of Canada team in September 2019 as a conservation technician.