www.natureconservancy.ca > Home > What We Do > Conservation Research

Emily Trendos, PhD candidate, and Zachary Moore, MSc candidate, have been selected as the 2020 Weston Family Conservation Science Fellows. Learn more about Emily and Zachary, below. 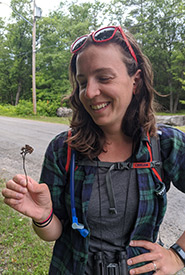 If you ask Emily Trendos, Weston Family Conservation Science Fellow at the Nature Conservancy of Canada (NCC), there’s nothing creepy about the crawlies she studies.

“I did my undergrad at the University of Guelph in zoology and that’s where my interest in working with insects came about,” she says. “I took all the courses I could on entomology, including two field courses — one in Vietnam and one at the Queen’s University Biological Station.”

After her undergrad, Emily continued her studies at the University of Waterloo, completing her master’s in environmental studies. Her work there focused on monitoring woodboring beetles in urban forests, and after spending many joyful hours sifting through thousands of insect samples to identify them, she knew she had found her calling.

“I’ve been working with wildlife since 2011-2012– my first field work was a volunteer position in Peru, so I thought I wanted to go into wildlife research, but I wanted to try the field aspect first to see if I would actually enjoy it. I loved it down there; it was an amazing experience, so I pursued wildlife research after that.”

To Emily, it was a natural step for her to pursue a career researching the species she loved. She has since worked in California, the Northwest Territories and in Ontario with the Ministry of Natural Resources and Forestry. She will be bringing her passion and experience studying some of Canada’s smallest critters to NCC while completing her PhD.

“I’ll be studying the mottled duskywing butterfly, which is an endangered species in Ontario and Manitoba,” she says. “It has very specific habitat requirements, so it’s especially at risk with climate change and other factors.

I’m going to be looking at population dynamics of that species, and that will help inform us when we’re doing re-introduction into suitable habitat around Ontario because it’s disappeared from a lot of those places.”

Emily believes the fellowship aspects within NCC are going to be very valuable experience, building on her knowledge about how the organization conserves land and habitat for species at risk, like the mottled duskywing.

“I don’t have a lot of experience in land acquisition and conserving — the actual process of conserving a chunk of land — so that will really help me moving forward. That’s a big part of wildlife protection study,” she says. “I’m going to be delving into the science, presenting findings, and then getting to see how that feeds back into land conservation. I’m getting both sides of the conservation coin with this fellowship.” 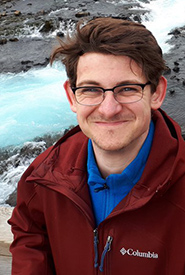 Zachary Moore, Weston Family Conservation Science Fellow at the Nature Conservancy of Canada (NCC), will tell you that conservation theory is for the birds.

While attending the University of Toronto and majoring in evolutionary biology and ecology, he completed two independent theses focused on theoretical populations and community ecology. This study included using invertebrate communities to test how different human and environmental impacts agitations could affect the dynamics of different systems.

“I thought that research was interesting and I really liked the modeling side of things, but I thought that the issues we were looking at were largely too theoretical for my taste. They didn’t really have any applications that I could see coming out of them immediately,” he says.

Looking to satisfy his hunger for real-world application, Zachary spent the next year working in labs. He then attended Niagara College to obtain a graduate certificate for ecosystem restoration.

“I got a more hands-on view of what’s being done on the ground and, based off that experience, I applied for a job with NCC out west here in Alberta. I was lucky enough to get an internship with NCC.”

After completing his internship, Zachary continued to work with NCC, taking on more data-driven projects and expanding his knowledge and experience doing the hands-on conservation work he loves doing.

“When I heard about the fellowship, I thought that this is a really good fit for me. Its population ecology research, it’s with a species group that I haven’t yet worked with — birds — and it’s a chance to stay involved with NCC,” he says. “I realized that the program was really fitting with my interests because it wasn’t just researched focused, but looking at other factors in environmental sciences. I like the idea of getting a more diverse background as opposed to just focusing specifically on the academic research.”

Zachary will be studying grassland songbird communities in response to difference grazing regimes on NCC properties.

“The area that I work in is the Waterton Park Front and it has it has one of the highest concentrations of diverse NCC properties and one of the highest concentrations of grazing leases and so we have a ton of different ranchers doing a ton of different things on our land,” he says. “The idea is that we could use the bird communities as an indicator of the impact that the different grazing regimes have on the landscape, and we could use that information to advise future managements.”

This research will help NCC and ranchers develop a grazing strategy that could benefit threatened species of birds. Grassland bird populations have shown steeper, more geographically widespread and more consistent decline than any other category of North American species.

By changing his own habitat, Zachary is hopeful that his new surroundings and this fellowship experience will help open doors and his perspective on how we conserve land for species in Canada.

“It’s been a learning curve. I grew up in Toronto my whole life and now I’m living in southwestern Alberta. It’s a completely different culture and it’s just really interesting to see how those two things can mix,” he says. “I’m really happy to be on the forefront of an NCC science program like this.”