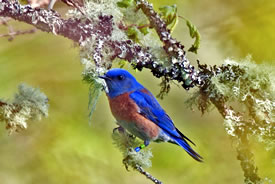 The western bluebird is a small thrush, easily recognized by its bright blue and rust plumage, with males much brighter than the grayish-brown females. 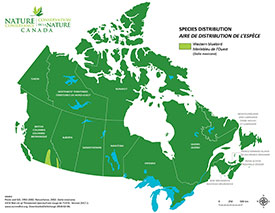 Western bluebirds can be found in open woodlands. They make their nests in existing cavities in trees, dead wood or nest boxes.

The beautiful blue songbirds were a once common sight on Vancouver Island and the Gulf Islands. Known as harbingers of spring, their song would be heard as the weather turned warm and the vibrant wildflowers began to bloom in Garry oak meadows and woodlands.

In 2012 NCC joined a group effort to reintroduce this Garry oak ecosystem-dependent species to the Cowichan Valley (see Cowichan Garry Oak Preserve). The Garry Oak Ecosystems Recovery Team (GOERT), the Cowichan Valley Naturalists, Victoria Natural History Society, Ecostudies Institute – Washington, the Province of British Columbia and NCC have contributed their skills and resources to the Bring Back the Bluebirds Project.

Western bluebirds are one of 25 species or landscape options that can be symbolically adopted through NCC’s Gifts of Canadian Nature gift-giving program, which contributes to critical conservation work across the country.

Your gift will help care for habitat that these birds and other species rely on for their survival.

You will receive a tax receipt for your donation, and you will help protect our country’s natural areas and the species they sustain — for today, tomorrow and for generations to come.