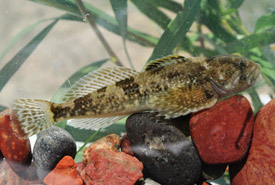 The Rocky Mountain sculpin, sometimes referred to as the Eastslope sculpin or St. Mary sculpin, can be identified by its broad, flattened head and smooth, scaleless body. The species' first dorsal fin and its lateral fins have tiny spines to protect it from predators. This small fish, reaching up to 114 millimetres, does not have a swim or air bladder. 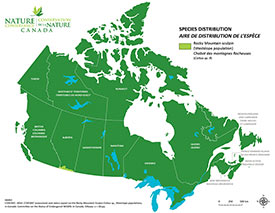 In Canada, this species can only be found in the Milk River and St. Mary River watersheds of Alberta, as well as in the Flathead River in British Columbia. Sculpins are bottom-dwellers, which means they inhabit the lowest levels of waterbodies. The species prefers cool, clear streams with a rock, gravel or cobble substrate.

The Rocky Mountain sculpin often remains hidden under rocks or in vegetation during the day.

The Rocky Mountain sculpin is nocturnal and forages mostly at night. It tends to prey on aquatic insect larvae, molluscs and other small fishes. 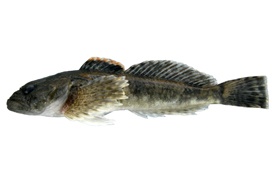 Threats to this species include habitat alterations or complete loss due to a reduction of flowing water or elevated temperatures. Sculpins occupy the benthic level of water and will often lay and forage here. Siltation (sand or gravel turning into silt from pollution) of a watershed bed has impacted reproduction for the Rocky Mountain sculpin, making it difficult to lay and fertilize eggs.

NCC’s Alberta region recently acquired the Cook property, an area made up of two blocks of land totalling 1,040 hectares (2,570 acres). The 194-hectare (480-acre) L&S Cook project is located approximately 20 kilometres south of the town of Cardston, close to the Montana border. The property is owned and managed by Layne and Stacey Cook and is grazed for beef production. Made up of rolling hills, upland prairies and plateaus, this property helps protect the habitat of the Rocky Mountain sculpin and many other at-risk species.

Many individuals and organizations have contributed generously to the conservation of these places, among them the Province of Alberta land Trust Grant and Enbridge through their Neutral Footprint Program.