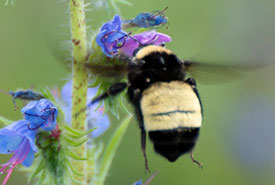 Did you know that the American bumble bee can flap its wings 200 times per second? But that’s not enough to keep it afloat, as this species is experiencing rapid population decline across its Canadian range. Once relatively common, this bee is now becoming increasingly difficult for bee scientists to find.

The American bumble bee is a large, fuzzy bumble bee about two centimetres in length. Males have a black head and black striping on a mostly yellow, orange-tipped abdomen and have longer antennae than females. Females are distinguished by dark wings and yellow and black abdominal banding. 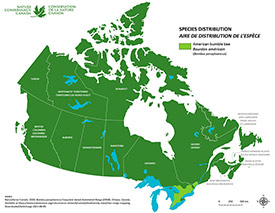 The American bumble bee occurs throughout the U.S. and Mexico, with southern Ontario and Quebec being the northern limit of its range. This bumble bee live in colonies and nests can be found in tufts of grass, tree cavities, rock piles or abandoned rodent nests. It emerges from hibernation in late spring to early summer and the nests are above ground in tall grass, unlike most bumble bees which nest in underground crevices.

Bee researcher Sheila Colla from York University and her research team led by Victoria MacPhail found the American bumble bee’s occurrence fell by 70 per cent and relative abundance by 89 per cent between 2007 and 2016, compared to 1907–2006. The species still persists in core areas of its Canadian range and is an increasingly rare sighting in cities like Toronto.

The species’ decline is likely not due to any single cause. Threats to their survival include climate change, habitat loss, pesticides, pathogens and diseases.

What is NCC doing to protect the habitat of American bumble bees?

This species has been documented within the Nature Conservancy of Canada’s (NCC’s) natural areas in Ontario, such as Prairie Smoke and Little Bluestem Alvar in Carden Natural Area. Continuing to protect and restore habitat will help to conserve this species.

What you can do to help American bumble bees

You can submit sightings of American bumble bees to iNaturalist or Bumble Bee Watch. This helps researchers assess population trends and distribution, and helps organizations like NCC prioritize habitat protection and restoration.

Planting native plants in your garden can provide nectar and pollen sources to pollinators like American bumble bee. This species uses a variety of flowering plants, including asters and goldenrods, so considering planting these in your gardens.