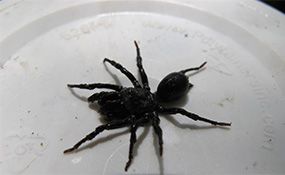 The black purse-web spider can be quite elusive. Recently, it was found recently on the Nature Conservancy of Canada's (NCC's) Hazel Bird Nature Reserve property, located within the Rice Lake Plains in Ontario. It is the only arachnid (spider) in Ontario that belongs to the tarantula group.

The spiders’ most distinctive feature is its fangs, or chelicerae. The fangs protrude directly in front of its body, instead of at various other angles, as is typical of many species of spider. Similarly to many other tarantulas, this species is harmless to humans. It is quite small, only about the size of a penny, and is black. 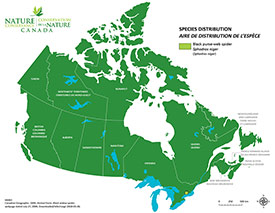 The black purse-web spider has been found in 17 different locations in Ontario, from Windsor North to near Belleville. The spider generally resides in grasslands, prairies and open, grassy woodlands with early successional pine, oak and well-drained soils, such as sand.

The spider spends the majority of its life living in a cylindrical tube that it weaves. It buries the majority of the tube, or its web, underground and camouflages the remaining above-ground section using twigs, leaves and other debris. These tubes, being expertly hidden, are very hard to locate. For this reason, this spider’s behaviour is somewhat of a mystery to scientists.

How does it catch its prey?

As part of the construction of its tube, the spider stretches the above-ground section of its tube to attach to a larger object, such as a tree or plant. The tension created through the stretching of the tube causes it to vibrate when an insect lands on it. Similar to other web-weaving spiders, the black purse-web spider responds to vibrations in its tube. When the spider detects the vibration, it runs up the length of the tube, and impales its victim with its long fangs. It then consumes the food, and disposes of the insects remains.

How does it mate?

Not much is known about the mating of these spiders; however, it is clear that male spiders seek out females. Males are the only sex of spider that have ever been captured crawling out of their tubes. This is the reason why black purse-web spider surveys are only able to collect information pertaining to males. The spiders generally give birth to around 50-80 spiderlings, and it is thought that they leave their mother in April.

Scientists are currently conducting research to determine whether the species is difficult to locate because it is endangered, or whether it is simply rarely detected due to its cryptic nature. Nonetheless, the species is classified as vulnerable. Currently, the species is a candidate for and consideration by the Committee on the Status of Endangered Wildlife in Canada (COSEWIC). Consideration by COSEWIC would be beneficial, as this would result in additional surveys that could confirm its range and abundance. This would help to raise awareness about a species designated within a group of arthropods that do not receive much scientific attention in Ontario.

NCC is currently working with the Ministry of Natural Resources to help search for the species. NCC and research staff were ecstatic to find this spider on NCC’s Hazel Bird Reserve in the Rice Lake Plains. As part of the research on the spider, scientists located a specimen of the spider on NCC’s property. The specimen was sent to the Trent University DNA lab for further analysis. The information gathered from this analysis will help to promote the spider for COSEWIC consideration, and will help to raise awareness about this vulnerable spider.