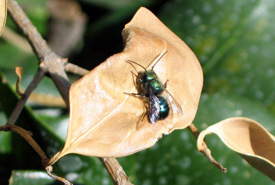 At first glance, the blue orchard bee appears black, but is actually a dark metallic blue-green. Its hairy body traps pollen and delivers it from one flower to the next, making this species a highly efficient pollinator sought after by farmers and gardeners.

Females typically measure around 14 millimetres long and are often mistaken for flies due to their dark colouring. Males, on the other hand, are approximately 11 to 12 millimetres in length, with longer antennae than females and tufts of light-coloured hair on their heads. 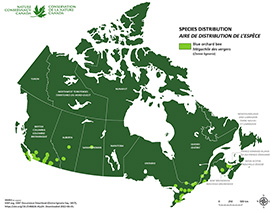 The blue orchard bee occurs in woodlands and forest edges across North America, ranging in the east from Nova Scotia to Georgia, Michigan and Texas, and in the west from southern British Columbia to southern California.

Like many other bee species, blue orchard bees feed on nectar and pollen from flowers, collecting nectar in their honey sacs from many plants.

What is its ecological significance?

This native species is highly valued for its pollination of fruit crops, including cherry, pear, apple, blueberry and almond. They pack pollen beneath rows of scopa, which are stiff hairs below the abdomen. Females form a mixture of pollen and nectar that they bring back to their nests into balls with the aid of their own saliva, which the larvae eat.

As a solitary species, each blue orchard bee looks after its own brood rather than living in a colony made up of worker bees and a queen. Despite this, individuals will nest near each other, resulting in decreased predation pressures, more mating opportunities and increased genetic variation through cross-breeding.

Females use holes found in wood, hoses or pipes as nests for laying eggs. Once a female has deposited enough pollen and nectar into the hole, she lays an egg in the hole and seals it with mud. She repeats this process for the remaining six to 11 eggs she lays until she has created a separate cell for each egg in the same hole. Then she seals off the entrance to the hole with mud.

Interestingly, female larvae hatch from the eggs laid farthest away from the entrance, while males hatch from the ones nearest the entrance. This likely takes place for a few reasons. For one, males take less time to develop than females. Also, males have to hatch first so that they have time to mature and await new females throughout the mating season. Finally, in the event of nest predation, this ensures that males, which are less reproductively valuable than females, are eaten first.

Overall threats to this species are low; however, in some areas, pesticide use and habitat loss threaten the blue orchard bee.

NatureServe has ranked this important pollinator species as globally common, widespread and abundant. Numbers may have increased in some places because of increasing numbers of orchards.

NCC owns and protects the Cowichan Garry Oak Preserve, a property with savannah habitat where dozens of native bee species, possibly including the blue orchard mason bee, live. This species likely occurs on many other NCC properties, but has yet to be documented.