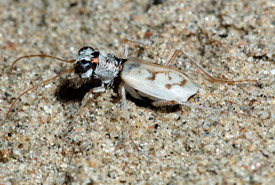 Ghost tiger beetles are so well camouflaged against their surroundings that it’s sometimes easier to see their shadows.

No bigger than a dime, on hot days ghost tiger beetles can often be observed doing a little dance, rocking back and forth from foot to foot to keep cool. They are predatory, flying and running to catch their prey.

Ghost tiger beetles can usually be found in sand openings, often referred to as sand barrens. Sand barrens are important habitats within the tallgrass prairie communities of the Rice Lake Plains.

The ghost tiger beetle is threatened due to loss of habitat and disturbance — the same open flat terrain these beetles inhabit is also prime for recreational vehicles.

NCC has protected significant tracts of land in the Rice Lake Plains – important habitat for this unique species.