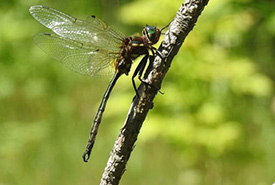 Hine’s emerald is a large dragonfly that can grow up to 63 millimetres in length. Like all dragonflies, this species has three stages of development: egg, larva and adult. The eggs are laid in muck or shallow water in wetlands and hatch into small brown larvae. The larvae live in water for two to four years before emerging onto land and shedding a layer of dead skin to reveal their adult form.

The adult Hine’s emerald has three main body parts: the head, thorax and abdomen. Its eyes start off brown, but quickly become a brilliant, bright green. Its thorax is metallic green with two yellow stripes on each side. Its abdomen is long, thin and blackish brown. Males have a claw-shaped tip at the end of their abdomen, which sets them apart from similar-looking dragonflies. 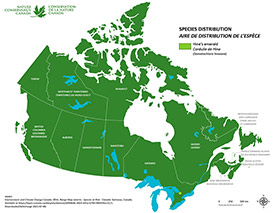 Where does the species live?

In Canada, Hine’s emerald is only found in Ontario. In the U.S., its range is larger and includes Wisconsin, Michigan, Illinois and Missouri.

Hine’s emerald lives in wetlands and has very specific habitat needs. It requires open space for foraging, as well as forested areas for resting. The areas it inhabits must also have slow moving, shallow water and holes dug by digger crayfish. During dry or cold months, the larvae use crayfish burrows for shelter.

In 2011, the Committee on the Status of Endangered Wildlife in Canada designated the Hine’s emerald as endangered. This stunning dragonfly has only been observed in one location in Canada: the Minesing Wetlands in Simcoe County, Ontario. Hine’s emerald is at risk of habitat decline due to urbanization and invasive species. This species is also listed as endangered in the U.S. and is globally imperiled, with less than 50 known occurrences.

In 2018, the Nature Conservancy of Canada (NCC) acquired the Patrick W. E. Hodgson property, a 43-hectare (107-acre) piece of land in the Minesing Wetlands. This area contains a variety of habitat types that are important for this dragonfly. Digger crayfish burrows can also be found on the property.

NCC has been aided by many Conservation Volunteers who have helped restore native grassland and remove invasive plants from the Patrick W. E. Hodgson property. NCC, in partnership with the Nottawasaga Valley Conservation Authority, has developed a restoration plan for the properties that have Hine’s emerald dragonfly as a priority. NCC also received support from Ontario Power Generation and Bruce Power for our work in this area.