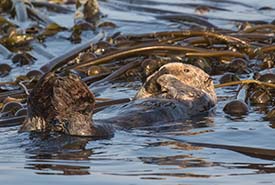 Sea otters are covered in dark down fur. Unlike other aquatic mammals, the northern sea otter does not have a layer of thick blubber to keep itself warm. Instead, pockets of air between the layers of fur serve as insulation. The air also helps otters maintain buoyancy.

The average northern sea otter has a lung capacity 2.5 times greater than other mammals of the same size, granting the otter its signature adorable buoyancy.

Something that separates the northern sea otter from other carnivores is its teeth. Carnivores typically have pointed teeth and especially prominent canines. Northern sea otters, however, have slightly smaller (though still pointed) canines and flat molars. These molars are used for crushing their food, such as shellfish, rather than tearing it.

In North America, sea otters once ranged along the Pacific Coast from Mexico to Alaska. Today in BC, they are restricted to a few regions of the mainland and Vancouver Island. Northern sea otters can also be found in Russia and Japan.

Before the 1700s, the northern sea otter was plentiful in Canada’s upper-Pacific region. The fur trade brought the sea otter to the brink of extinction. By 1911, it is estimated that there were fewer than 2,000 sea otters worldwide. Through the International Fur Seal Treaty that protected the species along with reintroduction projects, it has been increasing its range and numbers. Globally, the northern sea otter is assessed as endangered on the IUCN Red List of Threatened Species. In Canada, it is now assessed as a species of special concern by the Committee on the Status of Endangered Wildlife in Canada. The northern sea otter currently only populates around 30 per cent of its original habitat off the northern British Columbia coast.

Northern sea otters are especially vulnerable to oil spills and warming ocean temperatures. With over 27,000 kilometres of coastline, British Columbia has countless species that depend on this habitat. Northern sea otters spend the majority of their days on the water, but still usually live within a few kilometres of the BC coast. This means that water pollution and rising sea temperatures present a risk to the species' population.

NCC is working to conserve and restore healthy coasts and have helped to secure resource rights that have led to the designation of marine protected and conserved areas, where species like northern sea otters live.