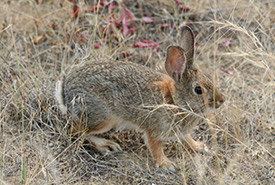 There are two subspecies of Nuttall’s cottontail in Canada. The pinetis subspecies is common in southern Alberta and Saskatchewan.

The nuttallii subspecies of Nuttall’s cottontail lives on ridges and slopes, in areas with thick sagebrush. In its more southern distribution it can be found in conifer forests. Since the cottontail’s coat does not change colour in the winter, it seeks out areas with grass cover to hide from predators.

In Canada, the nuttallii subspecies is found only in British Columbia’s Okanagan and Similkameen Valley, near the U.S. border.

While adult female Nuttall’s cottontail mate within their first year, it is common for this species to only give birth after their second year of life or later. A female may have up to five litters within a year, giving birth to up to six kits per litter in Canada. Nuttall’s cottontails in the U.S. have larger litters of up to 22 kits per litter. It is believed that the litter size difference between species in Canada and the U.S. is due to the length of their breeding season. In Canada, breeding seasons are much shorter because of the colder temperatures, resulting in shorter periods of vegetation being available within their habitat.

Due to the extensive loss of grassland habitat in the Okanagan Valley over the last century, populations of Nuttall’s cottontail have declined. They have also been impacted by urban and agricultural development in areas where this species once thrived. The current population size is not known. In 2006, the population size was estimated to be fewer than 3,500 individuals, based on the habitat available for the species to live on.

In 2016, the Committee on the Status of Endangered Wildlife in Canada reaffirmed the species’ 1994 special concern designation.

What is Nature Conservancy of Canada (NCC) doing to help protect habitat for this species?

NCC works in conserving and managing the Sage and Sparrow Conservation Area in the South Okanagan Similkameen if benefiting Nuttall’s cottontail, which is known to occur on this conservation area.