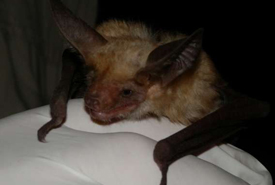 Pallid bats are on the larger side of the bat species, with females reaching up to 13 centimetres in length and males being a bit shorter. It has large ears and slightly larger eyes than what is typical for a bat. Its fur is sandy brown. Beside its nostrils are two glandular bumps that can emit a skunk-like odour. 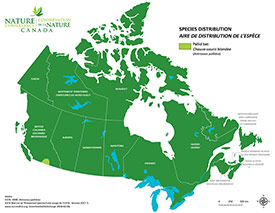 In Canada, a breeding population of pallid bat can be found only in an approximately 500 km2 area in the Okanagan Valley in southern BC. Its range extends from BC south into central Mexico. While most individuals migrate south to hibernate, recent observations of this species in December indicate that individuals are present in winter and may also hibernate in BC.

This species prefers open areas in deserts or dry grasslands, but can also occupy coniferous forests. They breed and roost within cracks in cliffs and rock faces.

Pallid bat is assessed as threatened by the Committee on the Status of Endangered Wildlife in Canada. In British Columbia, it is on the Red List, indicating a native species with an extirpated, endangered or threatened status in the province. Habitat loss and invasive white-nose syndrome threaten the species and have raised conservation concerns.

The Nature Conservancy of Canada (NCC) is protecting Sage and Sparrow Conservation Area, a 1,390-hectare (3,440-acre) conservation area on the Canada-U.S. border near Osoyoos. Pallid bats have been observed on this property. They are known to use this area to forage and may potentially roost here too.

In addition to being a crucial component of a migratory corridor for species moving between the desert areas of the western United States and the dry grasslands of interior BC, the Sage and Sparrow property supports many iconic South Okanagan species and the fragile habitat they depend on. This includes bat species, such as pallid bat and fringed myotis.