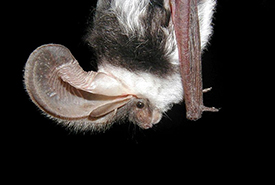 The spotted bat has a widespread but patchy distribution in western North America, and is generally considered rare where it occurs.

Spotted bat is known for its enormous ears, each reaching up to four centimetres in length. Since the bat itself only weighs about 18 grams and measures up to 12 centimetres long, its ears are one of its largest features. It has a wingspan of up to 35 centimetres. It has black fur with three large white spots across its shoulders and patches of white fur on the base of its ears.

In Canada, spotted bat can be found in the dry interior valleys of British Columbia. It prefers areas of low human activity and often retreats to deep crevices on tall cliffs to evade other species.

Like all bat species in Canada, the diet of spotted bat consists of flying insects, such as moths, flies and beetles. It feeds primarily at night, leaving its day-roost 30 to 60 minutes after the sun sets to feed.

A female spotted bat reaches sexual maturity at an age currently unknown by scientists, but when it does, it gives birth to one offspring annually. Mating starts in autumn and bat pups are born in late June or early July.

This species is known to be solitary, something atypical of most bat species. Instead of forming large hibernating colonies, social interactions between individuals is restricted to mating and pup rearing.

Can you hear me?

What is this species’ status in Canada?

It is estimated that there are fewer than 1,000 spotted bat adults in Canada. Although the population appears to be stable, it is threatened by habitat disturbances from development and other human activities, a decline in insect populations in combination with small populations and patchy distributions. It is assessed as a species of special concern by the Committee on the Status of Endangered Wildlife in Canada and Canada’s Species at Risk Act.

The Nature Conservancy of Canada’s work throughout the grasslands of BC’s southern interior protects habitat for spotted bat. Conservation areas such as Napier Lake Ranch near Kamloops and Sage and Sparrow near Osoyoos contain the cliffs, crevices and streamside habitats that this species requires. As we continue to learn more about the bat species using these lands, we hope to confirm the presence of spotted bat here and on other conservation properties in the region.