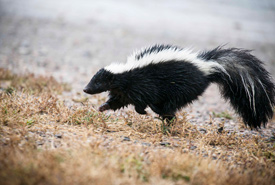 One of Canada’s most common mammals, striped skunks are known mainly by their ability to spray sulfur-containing chemicals strong enough to ward off bears and other predators. However, skunks will not spray in small spaces, including within the confines of their dens.

This species is easily recognized by white markings that run from its tail down to the thin stripe on its nose, with two white lines along its body. The rest of its fur is black. On average, striped skunks weight 3.25 kilograms and can measure up to 80 centimetres long, including their tail. They have short legs, with semi-webbed toes with long claws.
Since they are unable to outrun predators due to their small legs, skunks rely on their scent glands to scare off potential attackers. They have two glands, each about the size of a grape, that secrete an oily, yellow musk, when sprayed, can reach up to six metres and be smelled from over one kilometre away.

Striped skunks are omnivores and eat a wide variety of foods. Their diet consists of plants, eggs and small mammals, such as ground squirrels, mice, shrews and juvenile rabbits. A skunk’s summer diet is mainly insects, including grasshoppers, crickets and insect larvae.

In Canada, striped skunks can be found in ever province except Newfoundland and Labrador. This species was introduced on PEI by fur farmers in 1915 and are now a well-established species on the island.
They are known to prefer open areas, such as mixed forests and grasslands, but can also be found living in urban areas. Although they can dig their own dens, striped skunks usually live in the abandoned burrows of other species, such as fox. In urban settings, they may find shelter under porches and in cellars.

Skunks breed between February and March and usually give birth to — on average — four to six kits per litter in early May.

Striped skunk is common throughout its range in North America. However, it is a species that, like raccoons and coyotes, has adapted to human-dominated landscapes and occurs throughout our cities and farms. Humans should keep their distance from this species if they encounter it. Skunks are not known to harm humans, but will spray if they feel threatened.

Striped skunk is common throughout most of southern Canada and can be found on NCC properties across the country, expect Newfoundland and Labrador. NCC is working to protect these habitats where striped skunk live.