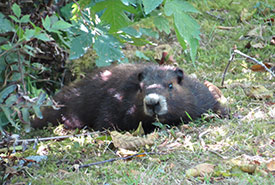 
The Vancouver Island marmot is considered the most endangered mammal species in Canada and one of the rarest mammals in the world. Occurring only on Vancouver Island, this endemic species has been on the brink of extinction, with as few as 30 wild individuals recorded in 2003. Fortunately, conservation efforts, including habitat protection and captive breeding, have been helping to increase their numbers and there are now just over 200 living in the wild.

The Vancouver Island marmot is part of the squirrel family and is one of the largest members; weighing 4.5 to 7.5 kilograms, adults are similar in size to that of a big house cat. Their fur is a rich chocolate brown, while features, such as their nose, forehead, chin and chest, are white. To help dig their burrows, they are well equipped with sharp claws and strong leg and shoulder muscles.

To survive the winter when food is scarce, Vancouver Island marmots develop extensive burrow networks within their habitat, allowing them to hibernate underground for six to seven months. During hibernation, the marmots drastically reduce their heart rate from an average active rate of 110–200 to three to four beats per minute. A third of their body weight is also lost while in this state of inactivity.

Vancouver Island marmots inhabit subalpine meadows, usually at 900–1,500 metres above sea level. These meadows are created and maintained by avalanches, deep snow and fires. In the spring, with the snow melting first in these areas, the meadows promote the early growth of grasses and wildflowers that are critical to the marmots after they emerge from hibernation.

While the population has increased to over 200 individuals, the Vancouver Island marmot is still listed as critically endangered by the International Union for Conservation of Nature Red List of Endangered Species.

It’s one of over 300 nationally endemic species highlighted in the Nature Conservancy of Canada and NatureServe Canada’s report, entitled Ours to save: The distribution, status and conservation needs of Canada’s national endemic species.