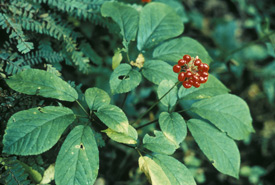 A species with great cultural value, American ginseng has been used globally for its medicinal properties. Indigenous communities used them to treat illnesses, from headaches to tuberculosis. In Asia, American ginseng is used in traditional medicine for its “cooling” property, complementing the “heat” property of the Asian ginseng.

American ginseng is not eye-catching when not bearing fruit. Ginseng is an elongated taproot, a type of root that acts as the main stalk from which other smaller roots sprout. This is what gives the ginseng the appearance of having “hair.” An underground stem, called the rhizome, grows on top of the root and is responsible for producing the future roots and shoots, which includes the leaves, stems and flowers. The above-ground portion of the plant bears whorls of leaves. When mature, it bears red pea-sized berries in its centre — a distinct ginseng feature. In the wild, American ginseng can measure up to 70 centimetres in length.

American ginseng was exported for over 300 years and was the second biggest export of French settlers, after fur.

What ecological role does it play?

American ginseng is a food source for white-tailed deer, and its seeds and fruits are foraged by small rodents. Although it is possible for the ginseng plant to recover from predation, its current small population size and uncontrolled deer populations make recovery in the wild difficult.

Wild American ginseng is highly sought after by poachers due to buyer demand. Although Canada grows American ginseng as a crop to keep up with export demands, some buyers still believe the wild species to be of higher quality. Both Ontario and Quebec have now banned the harvesting of wild species, but poaching still continues to impact American ginseng’s population size. Deforestation and invasive species have further impacted its habitat.

Since 1999, American ginseng in Canada has been deemed as endangered by the Committee for the Status of Endangered Wildlife in Canada.

Wild American ginseng can be found at Nature Conservancy of Canada (NCC) properties in Quebec and Ontario. These populations are closely monitored, and research has been conducted into increasing its populations through transplants. NCC does not disclose the location of properties with American ginseng to protect them from poaching.