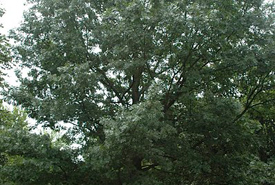 Shumard oak ranges from Indiana and Ohio, west to Kansas, and north to Michigan, Maryland and western New York. In Canada, it’s found in southwestern Ontario and throughout the Carolinian zone.

As one of the largest of the oaks, mature Shumard oak can grow up to 40 metres tall, with massive branches, under ideal conditions. It is capable of growing on moist sites and can tolerate partial shade. Shumard oak is known for its fall colours; its leaves turn brilliant red to red-orange. The bark is grey to dark brown, with egg-shaped acorns enclosed in a flat saucer-shaped cup.

Shumard oak is assessed as special concern in Canada. There are about 30 sites in extreme southwestern Ontario. Some of the largest trees occur in hedgerows, and there is limited opportunity for regeneration. The main threat to Shumard oak is habitat loss.

What is NCC doing to help protect this species?

Shumard oak has been recorded on two Nature Conservancy of Canada (NCC) properties: Clear Creek Forest (now part of Clear Creek Forest Provincial Nature Reserve) and on a property in Essex. Shumard oak can be difficult to distinguish from some other related oaks, and NCC is continuing to confirm if this oak occurs on other properties.

In September 2014, NCC and the Ontario Ministry of Natural Resources and Forestry signed a 15-year conservation agreement that outlines a shared vision for biodiversity conservation in the province. This agreement is in direct support of five new provincial parks established that year. One of the parks — Clear Creek Forest — is the largest woodland in the Kent-Elgin Shoreline Area, stretching along Lake Erie and home to over 20 birds of special concern. In addition, Clear Creek Forest protects three nationally vulnerable species in Canada— including Shumard oak.

NCC is working closely with government and representatives to effectively protect some of Ontario’s and Canada’s most vulnerable species.