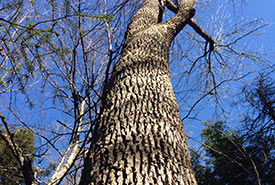 The white ash tree gets its name from the pale, silvery undersides of its leaves and the pale bark on its branches and twigs. While young bark is smooth and pale gray, mature bark has a diamond-ridge pattern.

Like other ash species, the leaves of the white ash are compound (made up of two parts). An average of seven oval or lance-shaped leaflets grow on a central stalk. They are dark green on top and pale underneath, becoming reddish-purple in fall.

White ash produces small, winged fruits that hang in clusters. Birds, such as evening and rose-breasted grosbeak, feed on the seeds within the fruit. White ash can grow up to 30 metres tall.

White ash grows in deciduous forests with deep, well-drained soils across eastern Canada, central and eastern United States and Mexico. It is often one of the first trees to colonize abandoned farm fields.

White ash is critically endangered, according to the International Union for Conservation of Nature. This is mainly due to an invasive insect species — emerald ash borer — that was accidentally introduced to North America from Asia in 2002.

Since its arrival in North America, this beetle has killed tens of millions of ash trees in Ontario, Quebec, Manitoba and the United States. With no natural predators, the emerald ash borer greatly affects rural and urban forests. The loss of native ash trees could result in changes to water quality, soil nutrients and an increase in invasive plant species that may colonize the areas where ash has been killed. If this beetle continues to spread through our forests, we could be witnessing the functional extinction of ash trees, as well as the unique webs of life they support.

To learn more about the emerald ash borer and how you can help stop its spread, click here.

The Nature Conservancy of Canada (NCC) has properties across the country in natural areas where white ash grows. These include Ontario’s Frontenac Arch, New Brunswick’s Miramichi Watershed (Bartholomew River), Cape Breton in Nova Scotia and along the Ottawa River in Quebec.

In October 2016, NCC partnered with the Meduxnekeag River Association Inc to protect the last one per cent of Appalachian hardwood forest left in New Brunswick, a forest type that includes white ash.  Monitoring and maintaining the health of existing ash forests is critical for their recovery. In addition, preventing the spread of invasive plants and restoring the banks of streams when mature ash die is also vital.