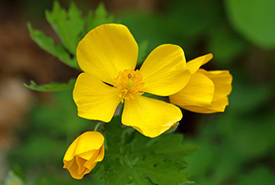 This perennial herb, also known as celandine poppy, can grow up to 40 centimetres tall. Its leaves are irregularly lobed and grow out from near the plant’s base. Wood-poppies bloom in May and early June, with four-petalled, bright-yellow flowers. The fruit of this plant is a grey seed pod with soft bristles that look like hair and that split open in late summer.

Wood-poppies grow in rich, mixed-deciduous woodlands and forested ravines. In the wild, they grow in areas with full shade, although cultivated wood-poppies thrive under partial sun conditions. It is believed that this species is found in these habitats, as they are unsuitable for development.

In Canada, wild wood-poppies are restricted to three patches of land near London, Ontario, and a population that was recently discovered 50 kilometres to the north.

What is this species’ status?

In 1993, the Committee on the Status of Endangered Wildlife in Canada assessed wood-poppy as endangered. It is also protected provincially in Ontario and listed as endangered under Canada’s Species at Risk Act.

This species is threatened by habitat loss and invasive species, such as garlic mustard and Japanese knotweed.