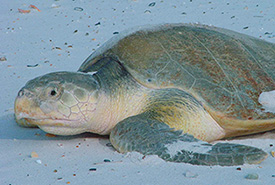 This is the smallest species of sea turtle found in Canadian waters.

The species' carapace, which grows to a maximum length of 75 centimetres, is greyish-green and broader than it is long. There are often three to five raised knobs along the back and serrations at the back edge of the shell.

Like other species of sea turtles, Kemp’s Ridley sea turtles have paddle-shaped limbs. The males also have a single claw on the forelimb and a long prehensile tale. 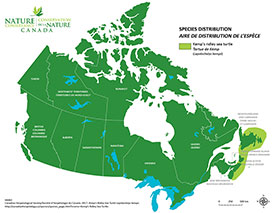 This sea turtle is only found in the Atlantic ocean.

The adults usually remain in the Gulf of Mexico, but juveniles are sometimes spotted along the coast of Nova Scotia and Newfoundland during the summer months, hiding and feeding in algae or sea-grass.

Critically endangered. This is considered the most endangered species of sea turtle in the world.