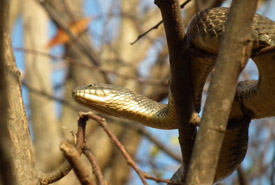 Lake Erie watersnakes, one of two subspecies of the common watersnake found in Canada, are medium-sized, non-venomous snakes. Adult females can reach up to 88 centimetres in length, with males reaching lengths of 71 centimetres.

They have “keeled” scales (scales with ridges running through the centre), with smooth scales covering their large head. They are a heavy-bodied snake, ranging in colour from grey to dark brown, and unpatterned to patterned, with dark brown to red coloured marks on their sides and back. Ventral (underside) scales are white or yellowish-white.

The Lake Erie watersnake occupies the Western Basin of Lake Erie, including four small islands on the Ontario side of the border.

Highly aquatic, the snake can be found on sandy or rocky shorelines, or actively swimming in the lake to hunt. While encountering a snake when you’re swimming may seem alarming, they are harmless and shy, and will quickly swim away if approached. They are rarely found far from the water’s edge, except when they are moving to and from inland hibernation sites (hibernacula) in fall and spring. Hibernation sites are spots that the snakes can hide in below the frost line, and include rock piles and cracks in bedrock, which may lead to underground caves.

The species is currently designated special concern by the Committee on the Status of Endangered Wildlife in Canada.

Some threats to the species include increased shoreline development, which results in habitat loss and degradation, risk of being run over by vehicles and direct persecution by humans. However, studies in the United States show that populations are recovering, likely due to increases in the introduced round goby, a species of fish that has become major prey for Lake Erie watersnakes.

What is NCC doing to conserve the habitat for this species?

The Nature Conservancy of Canada (NCC) owns and manages approximately two kilometres of natural shoreline on Pelee Island, which provides feeding and basking habitat for the snake, as well as several known or suspected hibernation sites further inland. To provide the best habitat possible, NCC has removed a patch of invasive common reed nearly 800 metres long from one of our beaches. This grass grows tall and dense, preventing movement and reducing basking opportunities for species like the Lake Erie watersnake. NCC also conducts regular garbage cleanups to remove potentially hazardous items from the shoreline.