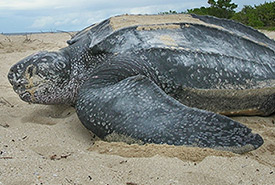 
This enormous sea turtle is the largest species of turtle in the world.

Leatherback sea turtles can grow to over two metres in length. Their carapace is covered with smooth skin and is gray, brown or black in colour. Both the carapace, the head and the legs of these turtles are covered with small white, yellow or pink blotches, and females often have more pink on the top of their heads.

The limbs of leatherback sea turtles differ from the freshwater species because they are paddle-shaped. These turtles also lack claws. 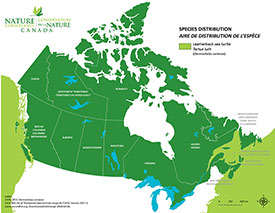 Leatherback sea turtles are one of the most widespread species of reptile. They can be found throughout both the Atlantic and Pacific oceans, and have been seen in Canada off of Vancouver Island, the Queen Charlotte Islands, Newfoundland and the Maritime provinces.

They can be found in bays, estuaries and the open sea.

This species is endangered.