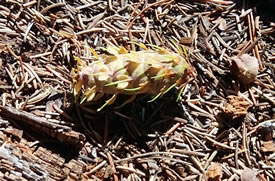 In Alberta’s Crowsnest Pass, a chipmunk dashes around beneath tall, gnarled trees. The ground is littered with long, bracketed cones. Their seeds are an important food source for this small mammal.

The interior Douglas-fir forest begins in British Columbia, where it is found primarily in the southern part of the Interior Plateau.

Douglas-fir trees are uncommon in Alberta, where they are at the easternmost end of their natural habitat. The interior Douglas-fir forest does cross into Alberta in a few places, such as the Crowsnest Pass, Castle Crown and the Southern Foothills region.

Douglas-fir is easily recognizable by its thick, burly bark, which makes it fairly fire tolerant. When low intensity grass fires occur on the open grasslands, individual trees usually survive, allowing them to grow old and gnarly. Fire and animal grazing keep other trees from establishing, thus maintaining the savannah.

The species is not a true fir — hence its scientific name, Pseudotsuga menzesii (Pseudo meaning false). It is easily identifiable by its cones, which have distinctive bracts on them that stick out of the main cone.

Douglas-fir trees create excellent habitat for many birds and mammals. Species that rely on Douglas-fir for their habitat include:

Human development, infrastructure and resource management pose significant threats to this habitat and the species that rely on it for survival.

Interior Douglas-fir forest is found on Alberta’s Lusicich property. Here, it grows on some of the south- and west-facing slopes in open grasslands and more dense stands in the north and east slopes. Although the Douglas-fir trees in this area can be large by Alberta standards, they are not the majestic treesof the coastal rainforest.

In 2012 the Nature Conservancy of Canada (NCC) protected the 263-acre (107-hectare) Lusicich property in Alberta, in collaboration with TD Forests.

More on the Midgeley property >