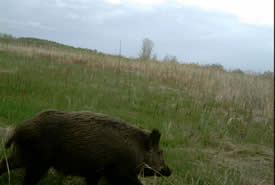 A full-grown wild hog means over 90 kilograms of fast, wild beast with razor-sharp tusks. This exotic roaming species, commonly known as wild boar and the same species as the pink farm pig, is presenting some challenges to prairie agriculture and our rural natural areas.

Originally from western Europe, these furry, long-legged pigs have adapted well to North American climates. Making nests from cattails and other wetland grasses, they hunker down, store body fat and easily withstand Saskatchewan's cold winters and hot summers. Elusive as they may seem, sightings of this nocturnal species have recently been reported in more than half of the rural municipalities in Saskatchewan — although specific numbers are currently not known.

There is no evidence of wild hogs displaying predatory behaviour towards humans. However, there have been reported cases of hogs charging at people. Therefore, avoid close interactions with these wild animals. People who suspect the presence of a wild hog should avoid areas where they think the animals are active. They should and report their observations to local agriculture or wildlife officers. Although there are a number of control options, people should always consult with provincial staff regarding local regulations on hunting and trapping.

Originally introduced to diversify the province's agricultural products, wild hogs' cunning ways, aggressive nature and prolific life cycle (with about two litters of six to eight young per year) have caused scientists and ranchers to be wary.

A threat to natural diversity

It seems this cunning mammal is able to eat anything — and everything — from nuts and acorns, birds' eggs and salamanders; even grain, deer and nesting waterfowl. Wild boars also pose a considerable threat to agricultural crops. Entire barley fields can be devoured through a single night of banqueting. The damage, however, also involves their table manners! In wetlands, for example, they root and dig, eating large amounts of native vegetation that was prime wildlife habitat.

"Stewardship of the Nature Conservancy of Canada's (NCC's) properties involves much more than assessing for species at risk and managing invasive plants," says Dale Gross, former director of conservation with NCC in Saskatchewan. "It’s a watchful, care-induced approach to all invasive species — whether plants, insects, animals, fish or amphibians — that must be taken for the long-term protection of these lands."

"They [wild boars] can harass cattle, eat crops, breed like crazy and are a general nuisance. Even the smell of a new person in an area can send this species into hiding, making it difficult to locate," says Ryan Brook, an NCC board member in Saskatchewan and assistant professor with the College of Agriculture and Bioresources at the University of Saskatchewan.

Despite its reputation as a nuisance animal, the wild boar's impressive ability to survive and prosper commands admiration. Many humans may never know they have wild boars living in their rural backyard.