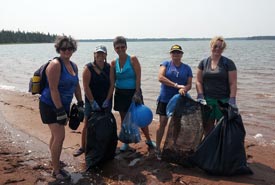 Whether you’re hitting up lake fronts or wading into saltwater for a dip, there’s nothing like spending some time for nature by the water. But vacationers might spot something else aside from other beach bodies sharing their space on land and in water: litter.

Now imagine you’re a shorebird, turtle or fish. The waters and beaches (where species feed, nest and breed) can sometimes be a minefield, laden with obstacles and hidden hazards. But each summer, the Nature Conservancy of Canada (NCC) deploys numerous Conservation Volunteers to help keep our shorelines a safer, cleaner place, for wildlife and people.

A sweep in Ontario’s deep south

Threats to wildlife and people from trash include: 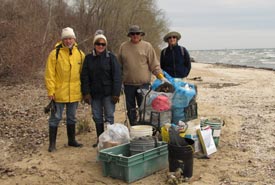 In response to a nation-wide environmental program — the Great Canadian Shoreline Cleanup — NCC has hosted a beach cleanup event at the Middle Point Woods property on Pelee Island in Ontario each year since 2012. Pelee Island is the most southerly inhabited part of Canada and is situated within the Western Lake Erie Islands Natural Area, where some of the most diverse natural habitats in Canada can be found. The area is part of a globally significant Important Bird Area and supports many insects, birds and aquatic species.

With support from individuals and organizations, Conservation Volunteers brave the chilly spring weather each year to sweep the beach clean of garbage for the entire shoreline on Middle Point Woods. Most recently on April 30, three volunteers collected three large bags of garbage and three large bags of recyclables, plus several too-large-to-be-bagged odds and sods. 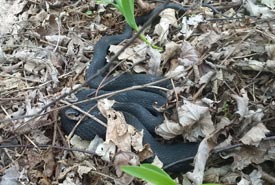 According to Jill Croswaithe, NCC’s conservation biology coordinator for Southwestern Ontario sub-region, drink bottles were the most commonly picked up item, followed by cans and balloons. Although the amount of trash was unsightly, it was endearing to see six eastern garter snakes (three were melanistic and three with the usual stripes) on the property.

Aside from combing the beaches, volunteers also hit the waters and remove marine debris. You’ve likely heard of the ocean gyres (gigantic circular currents) where much of the marine garbage accumulates. An estimated 100 million seabirds and 100,000 marine mammals die each year due to mistaking ocean garbage as food. It is critical to stop more trash from getting into our waters. 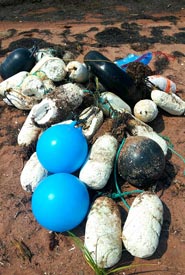 NCC has recruited experienced kayakers for Kayak Klean Up events on Boughton Island and Murray Harbour Islands since 2010. Julie Vasseur, NCC’s PEI program director, says that marine trash can come from aquaculture and fishing industries, and sometimes from people visiting the islands.

On August 13, 10 volunteers and three NCC staff paddled out to Boughton Island and tackled two of its shores. And what impressive results they achieved! In total 800 buoys, 300 metres of rope, many pieces of glass and plastic, 30 shotgun shells, two tires, a small life jacket, three individual gloves and one very new Nike flip flop were hauled off the island. 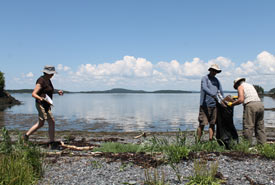 Earlier in July, NCC held the Simpson Island Cleanup (one of 10 sites along the southwest Bay of Fundy region) for the Great Fundy Cleanup. According to Amanda Fortune, conservation project coordinator with NCC in the Atlantic Region, Simpson Island is a very representative area in the Passamaquoddy Bay, with its spruce-fir forest and habitat for migratory seabirds. After three hours on the island, volunteers had collected 23 bags of garbage plus several pieces of large pressure-treated wood and foam pieces.

“The cleanups help promote the stewardship of our lands and show people how much trash pollutes our oceans and shores. They also strengthen one’s connection with nature and bring a sense of accountability for our natural spaces,” said Fortune.

What you can do to practice beach safety

Fortunately, the trash and litter issue is not impossible to overcome if everyone is proactive about it. Vasseur encourages people to get involved in an NCC cleanup event. 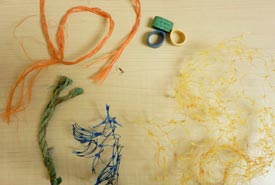 Over the years she has seen a lot of large debris float onto shore, from aquaculture equipment and buoys to remnants from old campsites. There are also the tiny pieces of litter, such as pop bottle lids, fine netting, lobster bands and bits of rope, which are especially dangerous to wildlife, as they can get ingested and clog up their intestines, often leading to death.

But not all garbage goes to the trash heap. In PEI NCC works collaboratively with aquaculture industries. There has been great support from local mussel farmers, who offer their expertise in the art of sorting buoys and bring their boats out, making the cleanup much easier. If NCC recovers any reusable equipment (usually buoys), we give them back to the farmers, thereby preventing them from going to the landfill.

“If you’re looking for something to do on a weekend, grab a garbage bag, a pair of gloves and pick a beach to sweep. It is hard work but leaves you with a great feeling,” Vasseur said. “You can even research ways to reduce your own plastic use and waste production at home, just as I have, learning from the best – my gram.”

Want to join the cleanup brigade? Click here to search for an event near you >

Click on the slideshow photos to revisit some of our favourite moments from this year.