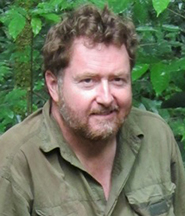 Robert Anderson is an entomologist at the Canadian Museum of Nature and the museum’s director of the Beaty Centre for Species Discovery. He has been an entomologist for 30 years, and his research interests are in beetle taxonomy and diversity, and the conservation of endangered species, especially insects. He has travelled extensively in Central and South America (as well as Canada and the United States), has published some 135 scientific papers and is the author of almost 200 species new to science.