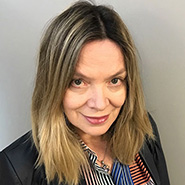 Vice President of Experience and Engagement

Ailsa Barry joined the Canadian Museum of Nature as Vice President of Experience and Engagement in 2014. In this role she is responsible for the public and commercial offer of the Museum. Following degrees in Anthropology and Art Ailsa began her career developing new media installations for museums and galleries in London, UK.

She joined the Microsoft Network as a digital producer before moving to the BBC Science. Ailsa undertook a number of roles at the BBC, eventually becoming Managing Editor for BBC Online. In 2003, she joined the Natural History Museum, London. As Head of Content, she led creative teams to deliver the Museum's public offer across digital, exhibitions and programming and led a number of major projects including an award winning interactive film narrated by Sir David Attenborough and featuring augmented reality.

Ailsa remains passionate about accessibly communicating science and has spoken and written frequently on the subject.

She is the current President of the Alliance of Natural History Museums of Canada (ANHMC).