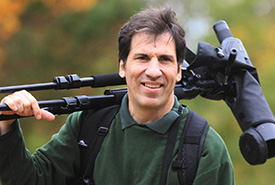 Christian Artuso is a conservationist and ornithologist with extensive experience in avian monitoring and conservation. He has a PhD from the University of Manitoba and his thesis examined the effect of human density on eastern screech-owls. He currently works in the conservation unit of the Migratory Birds Division of the Canadian Wildlife Service. He also sits on the Bird Specialist Subcommittee of the Committee on the Status of Endangered Wildlife in Canada.

As part of his work on prairie conservation, he has been a key contributor to Manitoba’s Keep Grazing project, funded by the Species At Risk Partnership on Agricultural Lands  program of Environment and Climate Change Canada, and worked closely with the Association of Manitoba Community Pastures. He recently chaired the program committee of the 12th Prairie Conservation and Endangered Species Conference. He has published many articles on Manitoba's avifauna and received the Cliff Shaw Award for outstanding contributions to the Blue Jay (Nature Saskatchewan peer-reviewed journal). Christian received Nature Manitoba’s Ernest Thompson Seton Award in 2020.

He has given hundreds of presentations on natural history and conservation to a wide variety of audiences and uses blog posts and social media for outreach. He has trained many young biologists in field methods and identification. He enjoys travelling and wildlife photography, having photographed over 4,000 species of birds, including some of the first known photographs of rare species. His photos appear in many magazines, books and other media.