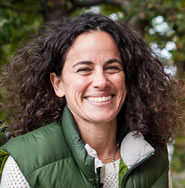 Dr. Elena Bennett is an Associate Professor at McGill, where she has worked since 2005. She received her BA in Biology and Environmental Studies from Oberlin College in Ohio in 1994, earned her MSc in Land Resources in 1999 (U. Wisconsin) and her PhD in Limnology and Marine Sciences in 2002 (U. Wisconsin). She is co-chair of the Future Earth global research project ecoSERVICES, which aims to set the research agenda for ecosystem services for the coming decade. Dr. Bennett was a Leopold Leadership Fellow (2012), and a Trottier Public Policy Professor (2013-2014). At McGill, she has won awards for undergraduate teaching, graduate supervision, contributions to campus sustainability, and contributions to local community sustainability. In 2012, she was selected to be one of two representatives of the Royal Society of Canada at the Summer Davos meeting of the World Economic Forum held in Tianjin, China. In 2016, she was named one of six NSERC Steacie Fellows.