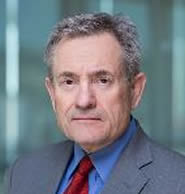 Eric Cline, Q.C., joined K+S Potash Canada as a Corporate Counsel in April 2012. He became a Vice President of the company in December 2012 and is presently Vice President of Land and Sustainable Development. A lifelong resident of Saskatchewan, Eric came to K+S after a successful career in the private practice of law, 16 years' in the Saskatchewan Legislature during which he served 12 continuous years in the provincial cabinet in the Ministries of Health, Finance, Industry and Resources, and Justice. Eric serves on the boards of the Saskatchewan Mining Association, International Minerals Institute for Innovation, Saskatoon YMCA and Shakespeare on the Saskatchewan Theatre. He and his wife Pauline reside in Saskatoon.