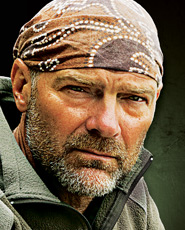 Best known as the Canadian Screen Award-winning producer, creator, director and star of the hit TV series Survivorman, Les Stroud is the only producer in the history of television to produce an internationally broadcast series entirely written, videotaped and hosted alone. Les’s work been nominated for 27 Canadian Screen Awards (formerly the Geminis), including Best Director and Best Host.

A celebrated keynote speaker, musician and author, both his books Survive! – Essential Skills and Tactics to Get You Out of Anywhere–Alive! (Harper Collins) and Will to Live (Harper Collins) have made the Globe and Mail's bestseller list. Les was nominated for Best Travel Writer at the Canadian National Magazine awards as well as nominated for a 2011 White Pine Award for Will To Live for the Forest of Reading Awards by the Ontario Library Association.

Musically, Les has shared the stage with the top in the business, including Slash, Journey, Lynyrd Skynyrd and The Roots. Revered worldwide for his iconic harmonica playing, Les’s songwriting style runs an eclectic gambit, from art-folk-roots rock to contemporary art rock.

A proud member of the prestigious Explorers Club, Les received Fellow (highest rank) of the Royal Canadian Geographic Society and is an advanced survival trainer for the Canadian Military Armed Forces. He sits on the board of advisors for the Sea Shepherd Conservation Organization and the Canadian Canoe Museum.