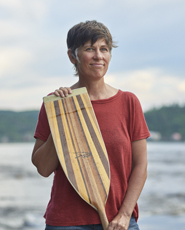 Meredith Brown, a champion for freshwater protection, is widely known throughout the vast Ottawa River Watershed as the founding executive director and Riverkeeper for the charitable organization Ottawa Riverkeeper, a licensed member of Waterkeeper Alliance.

Over 15 years, Meredith significantly raised the profile of the Ottawa River and brought together community organizations, municipal, provincial, federal governments, First Nation leaders, industry and civil society to work collaboratively to protect and restore the ecological health and resilience of the watershed. Over Meredith’s tenure, Ottawa Riverkeeper created a large network of dedicated citizen scientists and Riverwatchers. Meredith also strengthened the network of Canadian Waterkeepers, was a founding affiliate of the Waterkeeper Swim Guide and the National Water Centre. Still highly involved with Ottawa Riverkeeper, she now holds the officer position of Riverkeeper Emeritus.

Meredith holds degrees in biology, environmental engineering and resource and environmental management. She is a Fellow of the Royal Canadian Geographical Society and was awarded the Nature Inspiration Award from the Canadian Museum of Nature. Meredith is also a director and member of the National Council for the Canadian Canoe Museum.