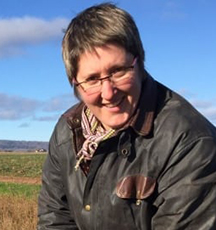 Patricia Bishop, an eighth‐generation Annapolis Valley farmer, has become an incredibly respected and well-known agricultural entrepreneur in our province.

Patricia was raised on a farm in Greenwich, Nova Scotia. After graduating from the Nova Scotia Agricultural College in 1999 with a B.Sc. in agricultural environmental studies, she continued her studies at Acadia University, earning a degree in education.

Following a hiatus from her roots, Patricia eventually turned back to where she started. In November 2007, she and her husband, Josh Oulton, purchased the 9-hectare (23-acre) TapRoot Farms.

Drawn to organic agriculture, Patricia and Josh quickly learned that natural produce would not sell itself. In 2009, they launched a newly adapted business model — Community Shared Agriculture (CSA). Customers register as “members” to receive regular food baskets of organic produce.

Patricia and Josh’s immediate success was realized when they more than doubled their expected CSA membership.

They now deliver baskets of fresh TapRoot Farms organic produce to over 200 families, every week of the year, in communities from the Valley to the Halifax Regional Municipality. Many families are also added in during the summer months.

Patricia’s work in recent years to promote locally grown foods and preserve agricultural lands has built province‐wide awareness of some of the most important issues affecting the future of farming: food security, land use and the viability of local farms.

Patricia and Josh have set a great example of how to capture new opportunities while maintaining the grassroots values of rural life. Along with their three children, they have successfully found a way to provide healthy, delicious food for their family and community while loving what they do.

Patricia is past president of the Kings County Federation of Agriculture and served on the Nova Scotia Agricultural Land Review Committee.

For their accomplishments and leadership in the agricultural industry, Patricia and Josh were named Atlantic Canada’s Outstanding Young Farmers for 2010 and received the 2010 Spirit Nova Scotia Local Foods Award.