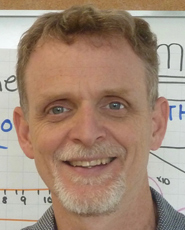 Stephen Skoutajan is an elementary Language Arts and Mathematics teacher with the Ottawa-Carleton District School Board. He has taught kindergarten to Grade 8 students in Africa, Costa Rica and the United States.

His focus on environmental literacy has him pulling his students outside the classroom and into the local neighbourhood, connecting to urban nature and the local economy as a way to integrate curriculum in real and relevant ways. By co-constructing school and indoor classroom gardens with his students, he has built a partnership with a local food bank to teach his students about food literacy.

He challenges his students to find their inner solutionary so they can see themselves reflected in their community as participants and activists. His students vote in the parallel municipal, provincial and federal Student Vote program, where they challenge local candidates with their optimism and childhood wisdom.

Stephen has a master's degree in integrated curriculum and a bachelor of music degree in performance. Outside of school, he’s a drummer in a local kids band, composing songs that chronicle some of the learning he has done with his students. He has won the Edward Burtynski Award for Excellence in Environmental Education in Canada and the Ottawa Capital Educators Award.