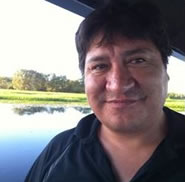 Steven Nitah was elected to Northwest Territories Legislative Assembly in 1999 and served as the Chair of the Special Committee on the Review of the Official Languages Act, helping to introduce and pass amendments to the act in record time. He also played a primary role in the establishment of June 21st as a territorial holiday. After his four-year term as an MLA, Nitah took the position of president and CEO of the Denesoline Corporation. In 2008, Nitah became Chief of Lutsel K'e Dene First Nations and in 2010 he represented, negotiated and signed on behalf of his community a formal agreement with the Government of Canada to start the creation of a protected area in Thaidene Nene. Today, through Nitah & Associates, Nitah is the chief negotiator of the Thaidene Nene for Lutsel K'e Dene First Nations. He is also the Northwest Territories advisor to the Indigenous Leadership Initiative.