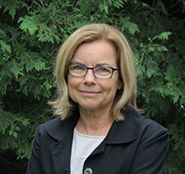 McGill School of the Environment

Professor Sylvie de Blois received a PhD in biology from the Universit� de Montreal in 2001. She is an Associate Professor of ecology at the Department of Plant Science and the School of Environment of McGill University.

She is also the Director of the McGill School of Environment, an interdisciplinary unit involving Science, Arts, Agricultural and Environmental Science, Law, and Management at McGill. She was an invited scientist at the Commonwealth Scientific and Industrial Research Organisation (CSIRO) in Australia and at the engineering School '�cole des Mines de Nantes' in France.

She is a member of the Quebec Center for Biodiversity Science and of the Ecological Society of America, and a scientific advisor on the European funded programme AGREENSKILLS aimed at supporting the international mobility of emergent researchers. Her research focuses on plant ecology, landscape ecology, climate change, biological invasion, and biodiversity science.

She has co-authored an award-winning book on the impact of climate change on Quebec biodiversity.