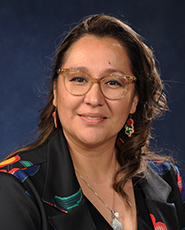 Mandy Gull completed a diploma in social sciences from Dawson College in 2005. She also holds two bachelor’s degrees from Concordia University’s School of Community and Public Affairs: one in Political Science (2005) and one in Community, Public Affairs and Policy Studies (2009). In July 2017, she was elected to a four-year term as Deputy Grand Chief and Vice Chairperson of the Cree Nation Government, having served as Deputy Chief of the Cree First Nation of Waswanipi from 2014 to 2017. She also owned and operated her own management consulting business from 2012 to 2014, specializing in working with First Nations communities in organization management. Mandy has always been passionately involved in the fight to protect Cree lands and the management of environmental impacts. She has participated and promoted campaigns for the protection of the Broadback river valley in her previous role and now as the Deputy Grand Chief has the opportunity to work on planning and developing a protected areas network throughout Eeyou Istchee.