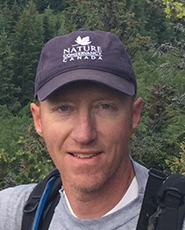 Tony McCue has been in his Nature Conservancy of Canada (NCC) role since 2018. Prior to joining NCC, he spent the better part of two decades travelling around North America as a wildlife biologist and performed a number of duties, from conducting inventories of carnivores in the Sierra Nevada range of California to helping identify Ecologically and Biologically Significant Areas in the Northwest Atlantic out of St. John’s, Newfoundland. He's also done comprehensive research of wolverine ecology in the Greater Yellowstone Ecosystem. He has a bachelor of science degree in wildlife ecology from the University of Maine, and a master of science degree in biology from Memorial University of Newfoundland.

He is now settled in Crowsnest Pass, Alberta, with his wife and two children.