www.natureconservancy.ca > Home > What You Can Do > Plan Your Legacy > Nature Legacy Society Donor Spotlight 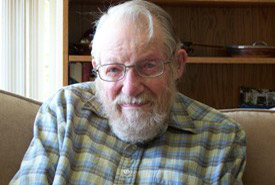 
When Alfred “Al” Carder was 7 years old, the year was 1917 and the Canadian Northern Railway line to Vancouver had just been completed. About a mile from his childhood home in a small village 40 kms east of Vancouver called Cloverdale there had stood a towering Douglas-fir tree. Al’s father had been keeping his eye on this tree and one morning noted that the top of the tree was missing from the spot where it normally towered above the ridge line.  Presuming that loggers must have felled it and anxious to know how tall that tree might be, he grabbed Al and the two made the journey by foot to investigate.

Al says, “First we measured the stump.  It was tremendous—8 feet high.  With father assisting, I was able to scramble onto its top.  I was surprised at the size as it was as wide as our kitchen floor.  Father put his tape around the stump which showed a circumference of 32 feet and diameter a bit over 10 feet. Next we measured the length of the tree.  This took the whole of that Sunday afternoon.  When father returned from our last measurement, I could see by his expression that he was disappointed with what he had found.  Father said it was not as tall as the Douglas-fir known as the Shannon Tree that had stood 6 miles to the south.”  The tree they had just measured was 341 feet tall compared to the Shannon Tree that had been 358 feet tall and 1,100 years old according to the growth circles that had been counted.

From that experience in 1917, Al Carder has been life-long-hooked on big trees in natural spaces.  Al began supporting the work of the Nature Conservancy of Canada in 2004 when he was looking for a partner to help conserve some of BC’s last stands of original growth coastal Douglas-fir (OG CDF) on Vancouver Island.   NCC is still active in the Cowichan Valley Natural Area working to preserve groves of Garry oak and coastal Douglas-fir trees—two of the most endangered ecosystems in Canada.

Having recently celebrated his 102-birthday, Al Carder is proud of his support of NCC and in 2011 made it known that he had named NCC in his will so that his love of Big Trees in Natural Spaces can outlive him. During a recent visit to Al’s home, when discussing the milestone that NCC was turning 50 years old this year, Al gave a smile as if to say, do it twice and the world takes you more seriously.  Al Carder would know.